Starting this weekend, takers of the Test of English for International Communication (Toeic) in Korea will be identified by computer. They will be photographed with a webcam, and a Naver system will confirm whether they are actually who they claim to be.

The feature will be adopted for every English-language Toeic speaking test in Korea from Saturday.

YBM’s Toeic speaking is one of the most widely taken English-language tests in the country. Its results are used as reference for more than 1,700 companies and public offices in the country for hiring new employees or for deciding on promotions. 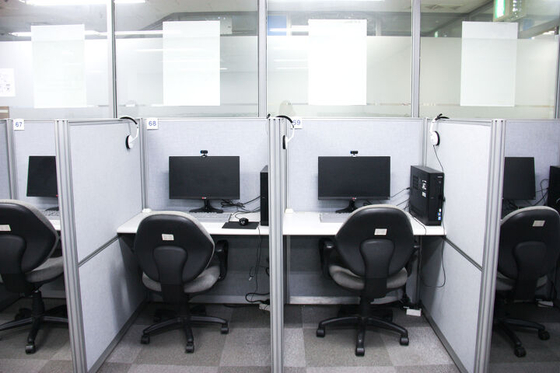 Identity verification for the test normally involves three steps: proctors examine identity cards before the test taker enters the room, comparing the particulars to what is on the application. The test taker then inputs their date of birth and test serial number into the system. Finally, the proctor compares the test taker to their submitted picture.

On whether the system can differentiate identical twins, a spokesman said it would depend on the level of similarity.

The image is captured and the comparison made in 0.1 seconds. Naver says the accuracy rate is 99 percent. The face recognition feature will be applied to the Japanese and Chinese versions of the Toeic speaking tests in the future.

Demand for such technology is linked with the interest in “non-contact” technology as Covid-19’s spread is creating a new norm where people minimize contact with each other.

Alchera, a Korean start-up, exported its face recognition technology to a retailer in San Jose, California. Founded in 2016 by former engineers from Samsung Advanced Institute of Technology, the start-up developed software that can automatically check whether the store’s staffers are wearing masks and whether they have a fever. Potential problems are immediately reported to the central computer system.

Alchera is currently developing a system that can be used to verify identities for the issuing of passports. It was selected by the Ministry of Foreign Affairs as a preferred bidder for the project. The start-up’s technology will be applied at Incheon International Airport this year to identify people as they walk by.

LG CNS installed face recognition systems in all of its 26 entrance gates at the LG Science Park in Magok, western Seoul, in February this year. Masks and glasses won’t have to be taken off as the system will look through them. The recognition will start as the staffer steps within 2 meters of the camera. Masks and glasses won’t affect the results.

Developed in partnership with China’s SenseTime, this software can skim through an internal database to find a match and open the gate once the identity is verified— all done in 0.3 seconds. The software can store facial information for 50,000 people.