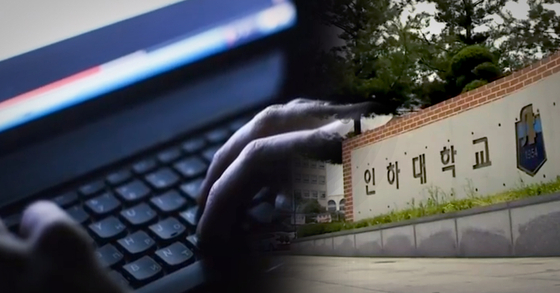 A group of 91 medical students at Inha University is facing disciplinary action for organized cheating on exams held online amid the coronavirus pandemic.

The Inha University College of Medicine said Monday that 41 second-year undergraduate students were found to have cheated on online tests in two subjects, administered on March 12, March 22 and April 18.

The school said that an additional 50 first-year students were found to have cheated on their midterm exams, administered online on April 11.

The students gathered in groups of two to nine people, according to the school, or used messenger services such as KakaoTalk or Telegram and phone calls to share answers. The students changed the wording of their answers to avoid getting caught.

Students who didn't take part in the cheating tipped off school authorities last month, prompting the university to launch an investigation.

The university urged students to come forward on their own. Of a total 109 students in their first and second years in the program, 91 turned themselves in, or 83 percent.

Like most other schools, Inha University has held its spring semester online, amid a coronavirus outbreak that has yet to be contained. But remote learning and the lack of supervision when administering exams online has raised concerns that cheating will become more commonplace.

About 20 days after authorities were tipped off, Inha University held a disciplinary committee meeting Monday afternoon. The school decided to award the 91 students zeros for the exams in question and ordered them to undergo community service and consultation with their professors.

But some within the university are criticizing the disciplinary actions as a slap on the wrist, noting the incident reflects the ethics of future doctors. Some have suggested that organized cheating should have at least resulted in probation or suspension.

The school said that it took into consideration that the students came forward on their own accord and are “deeply repentant.”

For the classes in question, the online tests only gave students 50 seconds to answer each question, but that wasn’t fast enough to prevent students from sharing answers. Students in some other departments at Inha University are required to film their face and hands when they take tests to prevent cheating, but that was not the case for the med students.

Universities continue to face a dilemma as they weigh the benefits of returning students to physical classes — including test-taking oversight and a higher-quality education experience — against continued concerns that the coronavirus will spread more widely if their students all flock back to campuses.

Two students infected with the coronavirus at Gachon University in Seongnam, Gyeonggi, last month attended some in-person classes and in-person midterm exams, causing alarm and prompting the testing of 200 people who had close contact with them. One more student at the university was found to have tested positive Monday. The university is considering changing their in-person final exams to be administered online amid safety concerns.

However, students at Konkuk University were also recently caught by their professor logging on from the same IP address while taking online tests. And in an online forum at Hanyang University, one user even published a post offering to be a proxy test taker before an exam.

Some universities, like Sungkyunkwan University, are adopting stricter guidelines for administering tests online, such as employing videoconferencing apps such WebEx, similar to Zoom. They are also requiring students to film themselves with two cameras while they take the exam.