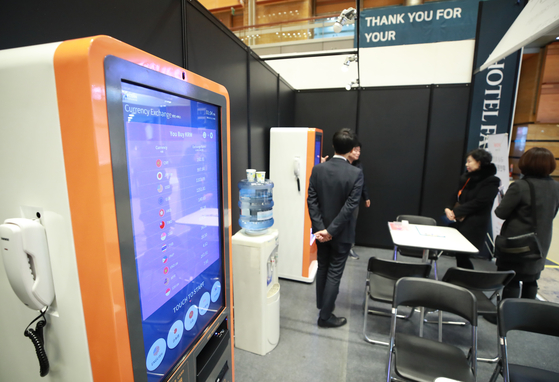 A foreign exchange vending machine displayed at the Hotel Fair at COEX in 2019. [YONHAP]

People in a rush trying to catch a flight will no longer have to wait until the next morning for banks to open to convert their Korean won to dollars or other foreign currencies.

They will be able to request the conversion via an app and then simply pick up the cash on their way to the airport at drive-throughs set up in places like parking lots or gas stations without leaving the comfort of their cars, even after business hours. They could even get their currency exchanged at the airline counter when picking up their fight ticket.

Some could even get their currency delivered.

The maximum amount for a single person will be set at $2,000 per exchange.

This is one of the ideas that the government discussed during its innovation strategy meeting on Thursday, along with the idea of allowing parcel delivery via drones and allowing local residents to utilize home-sharing services like Airbnb, which is currently limited to foreign guests.

Brokerage firms and credit card issuers will be allowed to directly convert foreigner currency. Currently, foreign investors have to wire the funds via foreign banks. The regulation that requires fintech companies to have two foreign exchange experts will be relaxed as well.

The changes are expected to not only usher in innovation but also benefit consumers.

The government said it will review existing regulations related to foreign currency exchange and immediately allow activities that do not violate the existing laws. For those that need legislative changes, the government will come up with reform bills by September.

“Innovative attempts are concentrating on convergence, non-human-to-human contact, foreign exchange and wire services,” Finance Minister Hong Nam-ki said during an innovation strategy meeting held with the private sector and scholars on Thursday. “However, it is a fact that regulations have restricted the spread of high-quality innovation.”

The government also said it will work towards allowing drones to deliver packages from 2025 by providing support as well as regulatory reform.

The Finance Minister said the government will also actively engage controversial businesses that need social consensus where there’s a clash between the newcomers and existing businesses.

One of the businesses being targeted is room-sharing services like Airbnb. Such businesses can now only host foreigners. Despite the regulation, platforms such as Airbnb continued to provide accommodations to Koreans, irking the existing lodging industry.

The Finance Minster said discussions on these innovative changes are essential.
“The post coronavirus era is expected to bring about significant socioeconomic structural changes, especially along with the sharp increase of non-human-to-human contact and digitalization speeding up the progress of the fourth industrial revolution,” Finance Minister Hong said.

“Our government and our economy’s capacity in meeting the challenge will determine whether we will leap ahead as a leading country in the post coronavirus era.”

A crisis is a terrible thing to waste