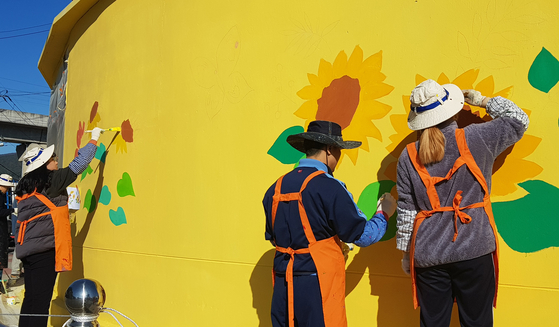 Volunteers paint the wall of a village in South Jeolla in November 2019. The government's third supplementary budget includes painting projects that will give temporary jobs to 8,500 artists. [South Jeolla Government

The government announced its largest supplementary budget ever to combat the coronavirus outbreak, but some of the spending it calls for is unconventional.


Most of the budget is intended to counter the impact of the pandemic by doing things such as offering liquidity to struggling businesses, as well as developing the foundations for future growth engines through a so-called Korean New Deal.

But some of the funding the government announced is raising eyebrows.

The government proposed 23 projects it described as “unusual” in the supplementary budget.

The government plans to spend 62 billion won ($50.9 million) on the voucher program. The vouchers will be sold to 6 million consumers at a 20 percent discount from their face value.

The goal of the program is to support the farming and fishing communities, which lost a lot of business when schools and restaurants were closed due to the outbreak.

The voucher can be used for delivered products, including by services such as Market Kurly, as well at local government markets selling fresh produce.

The discount vouchers are supposed to lead to at least 300 billion won of purchases from the farming and fishing communities, assuming shoppers start with the vouchers and buy other things as well.

The budget for the program is 75.9 billion won, which is supposed to finance temporary jobs for 8,500 artists.

The artists will be involved in projects such as painting over graffiti on public buildings but also creating their own artworks on city walls.

Each of the nation's 228 local governments will participate in the program.

Other unusual projects include the providing of mobile and wearable devices for 300,000 patients with chronic diseases such as high blood pressure and diabetes, with a budget of 4.4 billion won; a digital care system for 120,000 senior citizens living alone using smart devices such as artificial intelligence speakers, with a 4.7 billion won budget; and free influenza vaccinations for teenagers between the ages of 14 and 18, which will cost 26.5 billion won.

A 35.3 billion won budget is set for replacing old electricity meters with smart meters in 500,000 apartments.

“[I] have strong faith that the latest supplementary budget will not only help overcome the crisis that started with Covid-19 but also serve as a foundation for creating new growth engines in the post-coronavirus era,” Finance Minister Hong Nam-ki said.