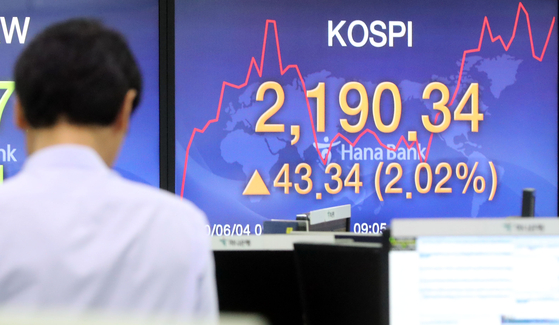 An employee looks at the screen in the dealing room of Hana Bank in Jung District, central Seoul, Thursday. [YONHAP]


Stocks extended their winning streak to a fifth consecutive session Thursday, reaching the highest level in over 100 days on economic recovery hopes. The won fell against the dollar.

The index got off to a strong start, reaching an intraday high of 2,191.00, or up 2 percent from the previous session's close, in the first 10 minutes of trading.

"The index may slow down in gains, but the hike is likely to last for a while amid hopes of economic reopening and coordinated global policies," he added.

Stocks rallied for five straight sessions since Friday amid growing hopes of an economic recovery, further fueled by the country's 35.3 trillion-won extra budget proposal to revive the economy amid the fallout from the new coronavirus pandemic.

The proposed extra budget marks the third of its kind this year and the largest ever in the country's history.