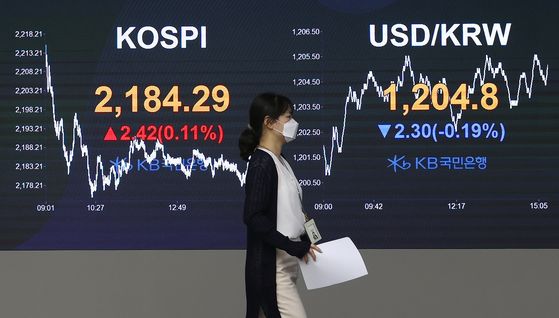 An employee walks pass the screen in the dealing room of KB Kookmin Bank, in the financial district of Yeouido, western Seoul, Monday. [YONHAP]


Stocks closed higher Monday, extending the winning streak to a seventh consecutive session despite losses in Samsung Electronics. The won rose against the dollar.

The index erased most of the early morning gains as Samsung Electronics Vice Chairman Lee Jae-yong appeared in a court for questioning by a judge over whether to approve an arrest warrant.

Despite the Samsung losses, the Kopsi managed to close in positive terrain, helped by positive leads for a global economic rebound.