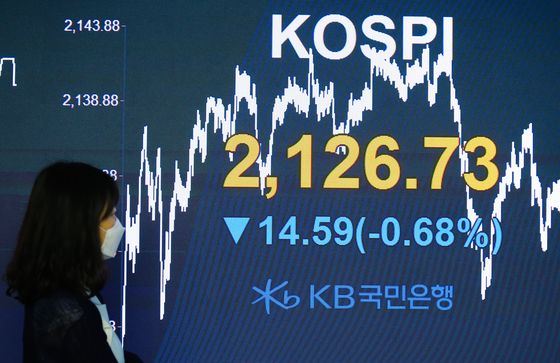 The Kospi closing figute is displayed on a screen in the dealing room at KB Kookmin bank, located in the financial district of Yeouido, western Seoul, Monday. [YONHAP]

Stocks closed lower Monday amid fears of a second wave of new coronavirus cases at home and abroad, reducing investors' appetite for risks. The won fell against the dollar.

The drop followed recent spikes in the number of new infections.

"The fears of resurgence in Covid-19 infections in the United States seem to have increased [investors'] appetite for selling," Kiwoom Securities analyst Seo Sang-young said.

Investor sentiment worsened as the World Health Organization reported on Sunday (Geneva time) that there had been 183,020 new infections globally in the preceding 24 hours, the largest single-day hike in coronavirus cases.

The country's daily tally sharply dropped to a nearly one-month low of 17 on Monday. Investors continued to remain cautious amid signs of slowing exports.

Most large caps traded lower, but stocks related to untact — a portmanteau of the prefix “un” and contact, meaning “no contact” — businesses made a bullish run.

The local currency closed at 1,215.80 won against the dollar, up 6.20 won from the previous session's close.

Stocks steady despite destruction of liaison office by North