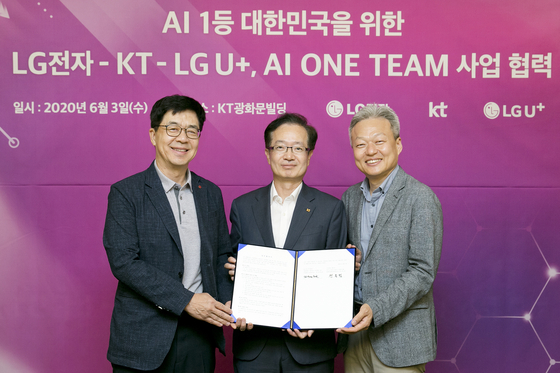 
LG Electronics and LG U+ announced Wednesday their participation in an artificial intelligence (AI) research initiative led by KT.


KT said that the electronics product maker and mobile carrier became a part of the alliance formed in February to collaborate on the AI-related projects.

In the short run, the team will connect two platforms — KT’s GiGa Genie and LG’s ThinQ — so that users can activate both systems on a single app or platform, while they work towards resolving the problems that might require a longer time frame.

The alliance, named AI One Team, seeks to leverage the vast amount of telecommunications records and roaming data of LG U+ and KT and LG Electronics’ technologies to come up with a digital system designed to contain the spread of infectious diseases like the coronavirus.

The areas of application are not confined to the public health sector, as the project aims to tackle other high-stake issues such as environmental pollution and ensuring safety at industrial sites, according to a statement released by KT.

LG Electronics runs five AI research centers in different countries, like the United States and Canada, to research high-tech areas such as deep learning, edge computing and data analytics, a factor that could benefit the initiative.

The AI One Team will likely compete with the AI alliance, formed by Samsung Electronics, SK Telecom and Kakao, which was launched in January.

The venture, they said, will focus on jointly developing powerful AI systems, including virtual assistance services.

Mirror mirror on the wall