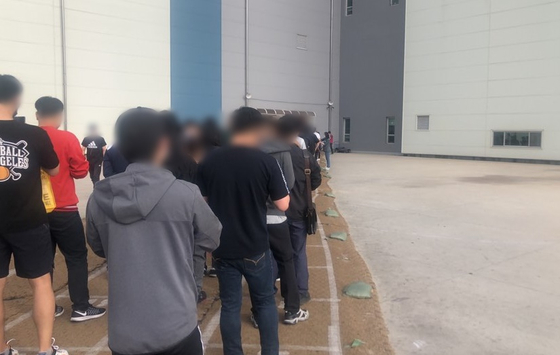 
At 7:30 a.m. on Monday, more than 50 people were waiting in line to enter the Coupang Dongtan distribution center in Hwaseong, Gyeonggi.


There were chalk marks on the ground to designate where each person should stand for social distancing purposes. Before entering the center, each is given some hand sanitizer and checked for a mask. The inspection continued inside the distribution center, where thermal imaging cameras checked temperatures.

While 112 coronavirus cases have been linked to the Coupang Bucheon distribution center in Gyeonggi as of Monday midnight, Dongtan distribution center remained popular with job seekers. They said that day labor positions offered at logistic centers are the best way to make money, especially as the job market has deteriorated due to the coronavirus outbreak. 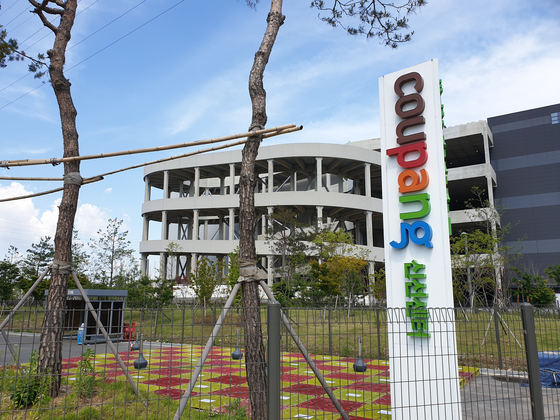 Coupang Bucheon distribution center is shut down for two weeks from May 25. [SHIM SEOK-YONG]


"I know that the Bucheon center is a recent Covid-19 hot spot, but the logistic center offers the best quick cash jobs,” a temporary worker at the Dongtan center said.

Most of the people on the 45-passenger shuttle bus to the Dongtan logistic center, which picks up workers at Jeongja Station and Ori Station in Bundang, were young people in their 20s and 30s.

"I'm afraid of Covid-19 infections, but it’s really hard to find any other temporary job these days,” a 21-year-old college student said. “Getting day jobs at the distribution center is the best way to make pocket money."

"I saw the news about a cluster of cases at the Bucheon center, but I’m assuming that it should be okay if I put my mask on," another man in his early 20s said. "The only way I can make money in a short time is by working at the distribution center."

Despite the possibility of another cluster of infections in a similar environment with so many workers in one place, the workers said that they have little choice but to work at a distribution center to make a living.

It's not only the young. The self-employed, whose businesses have been hit hard by the Covid-19 outbreak, are also working temporary jobs at the distribution center.

"A lot of freelance artists and self-employed struggling with the outbreak were working at the distribution center," a 30-year-old worker, who worked at a Coupang center in Gyeonggi last month, said. "People who come to the distribution center can't stay at home for three to four days even when they are sick because otherwise they can’t make a living. Even if you are sick, there’s no time to rest. I'll probably go to work even if I'm sick."

“I returned to Korea from working abroad in the fear of Covid-19, but it was hard to find a job because of Covid-19,” said a man in his 30s, who worked at the Coupang Bucheon distribution center. "I worked at the Bucheon center for three months while preparing my résumé. When I was working there, I saw many self-employed who temporarily closed down their businesses. They said they were having difficulties running their businesses because of the coronavirus outbreak.”

"Recently confirmed patients are hard-working," Kwon Joon-wook, a deputy director of the Korea Centers for Disease Control and Prevention (KCDC) and a head of Korea National Institute of Health, said in a briefing on Sunday. "It’s very heartbreaking to have confirmed patients among those who worked so hard to make ends meet."

Lee Jae-myung, Gyeonggi governor, ordered a two-week suspension of operations at the Coupang Bucheon distribution center and issued a two-week administrative order that prohibits gatherings at high-risk and multi-use facilities, including warehouses, funeral homes and wedding halls, until June 14. The tighter quarantine measures come after a series of a cluster of Covid-19 infections are reported at workplaces in the Seoul metropolitan area.