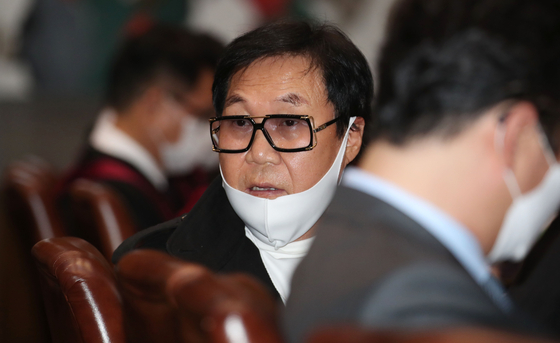 Singer Cho Young-nam attends his plea session at the Supreme Court on May 28. [YONHAP]

What determines the authorship of a work of art — is it the idea or the execution?

The Cho Young-nam case began in 2016 when the singer-artist was indicted of fraudulently selling artwork with his signature on it after having other people create most of the work and “doing only a small portion himself.” He was accused of paying a man surnamed Song to paint 21 pieces from 2011 to 2015, 17 of which he sold for a total of 153 million won ($126,000).

While the Seoul Central District Court sentenced him to 10 months in prison suspended for two years, an appeals court overturned this sentence and found him not guilty. The prosecution appealed, and Cho was summoned to make his plea on May 28.

The case is likely the most controversial of the 21st century in the Korean art world. This is partly due to the involvement of a high-profile celebrity getting tried for fraud, but mainly because of the heated discussions it has ignited within the Korean art scene on the meaning of ownership. From art critics and gallery owners to professors and journalists, different experts from all corners of the art world had their say on whether Cho was indeed a fraud, or whether the guilty ruling stemmed from a lack of understanding of art.

With the final sentence set to be reached in the coming weeks, all eyes are on the impending ruling from the Supreme Court that could have a lasting effect on the world of art in Korea.


Cho, born in 1945, debuted as a singer in 1969 when he released a translated version of Tom Jones’s “Delilah” (1969) that was included on singer Kim In-bae’s album. Cho became one of the hottest singers of the 1970s and 1980s, and also tried his hand at comedy and acting. He picked up painting as a full-time hobby while completing his military duties in the early 1970s and held his first solo exhibition in 1973. Numerous exhibitions followed since, the last of which was held in 2015. 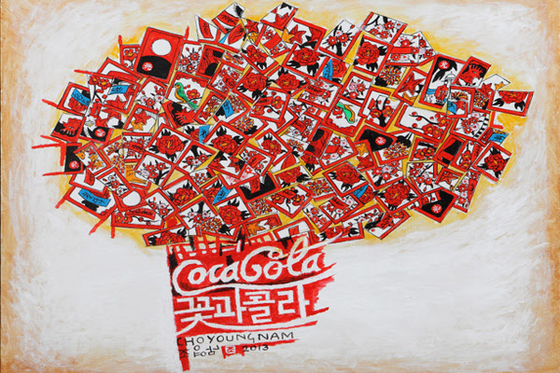 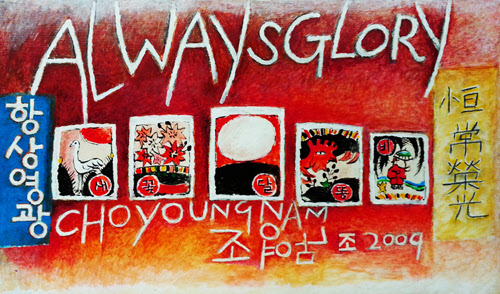 He played around with various themes, the most famous of which were his series of paintings using hwatu – the cards used to play the Korean game known as Go-Stop. He first started his hwatu series by using actual pieces of the cards in collage work on the canvas, but later began to create fine art paintings featuring the cards. The “Coca Cola” and “Always Glory” series were created in the early 2010s.

On May 19, 2016, Cho was scheduled to put on a solo exhibition at Gallery U.H.M. in Yongsan, central Seoul. However, in the days prior, he was faced with mounting questions about the authorship of his art. In an interview with a YTN reporter, Cho admitted that he received help from his assistant Song Gi-chang — a lesser known artist. Song verified the admission and claimed he was in fact the creator of the works. The gallery canceled the exhibition.

But Cho was defiant. He maintained that “despite the fact that 90 percent of the work was painted by the assistant, it is common practice in the art world.” A month after the cancellation of his scheduled exhibition, Cho was reported to the Chuncheon District Prosecutors’ Office for defamation by a coalition of 11 art organizations including the Korea Professional Artists Association and the Korean Fine Arts Association.

“Cho Young-nam has defamed the 50,000 artists of the 11 organizations by falsely stating that ‘Artist Song is just an assistant. It’s true he painted over 90 percent of the work, but that’s common practice in the art world.’ ‘There are overseas artists who have more than 100 assistants and most Korean artists also have assistants to help with their work,'” the coalition said in a statement. While the defamation allegations were ultimately dismissed, prosecutors began an investigation into suspicions that Cho committed fraud. 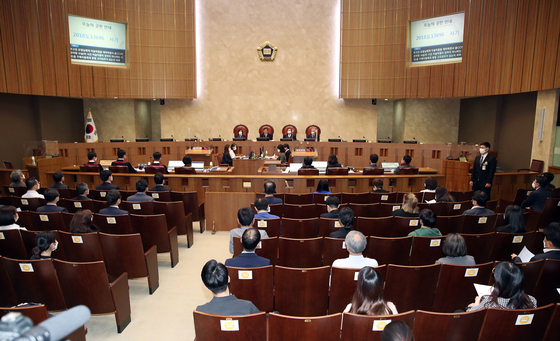 A public plea session held on May 28 on the Cho Young-nam fraud case at the Supreme Court. [YONHAP]

The initial court hearing found Cho guilty, citing, “Song was more than an assistant and should be considered as an independent author who took part in the work.” It added that Cho failing to notify his buyers of Song’s involvement in the production of the paintings was fraud. However, the higher court ruled him not guilty because “Song is not more than a technical assistant and not the author of the work” and said Song’s involvement was not essential information that needs to be shared to the buyers. According to the higher court the author’s role lies in the creation of ideas, putting Cho as the author of his works. 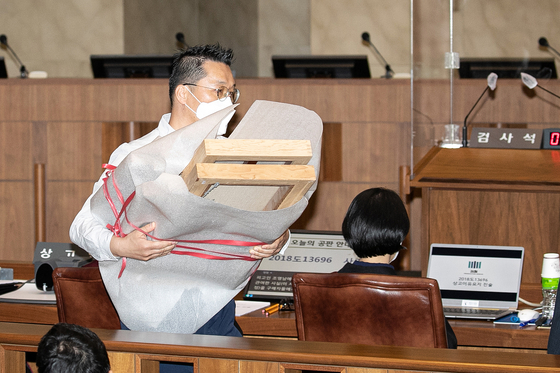 Pieces of Cho Young-nam's artwork being delivered to the courtroom to be used as evidence. [NEWS1]

The public plea session held last week revolved around whether it was customary for an artist to have an assistant in the creation process and whether, if an assistant was involved in the process, the artist was obligated to inform the buyer of the existence of the assistant. Cho and his attorney Kang Ae-ri of Dongbu Law called on Pyo Mi-sun, former president of the Galleries Association of Korea, to testify, while prosecutors called artist Shin Je-nam, the head of the advisory committee of the Korea Professional Artists Association.

Shin stated that having an assistant “was not a common practice,” while Pyo countered that it is customary and the level of influence that assistants have on the work “differs with every artist.”

The percentage of how much of the work is done by the assistant, nor the fact that the assistant is a professional artist and Cho is an untrained amateur are deciding factors of the artwork’s authorship according to Pyo, who cited conceptual artist Marcel Duchamp (1887-1968) and his monumental “Fountain” (1917) to support her argument that the conceptual idea behind the work comes before the physical involvement.

The art must go on


Duchamp, considered one of the most pivotal figures of 20th century art, is probably most famous for a piece which consisted of a urinal that he bought, then signed and displayed. At the time he was mocked by his contemporaries, but decades later he is remembered in the history books as a genius who changed the idea of art forever.

According to Chin Jung-kwon, a former humanities professor at Dongyang University and art critic who also testified at Cho’s first trial, the idea of authorship in art changed over time and it was not until the late 19th century that artists were expected to paint their works themselves. It was customary for European artists to let their apprentices physically execute their ideas from the time of the Renaissance — examples of which include Michelangelo’s Sistine Chapel ceiling paintings — until the 19th-century Impressionists, which quickly changed with Duchamp’s conceptual revolution. 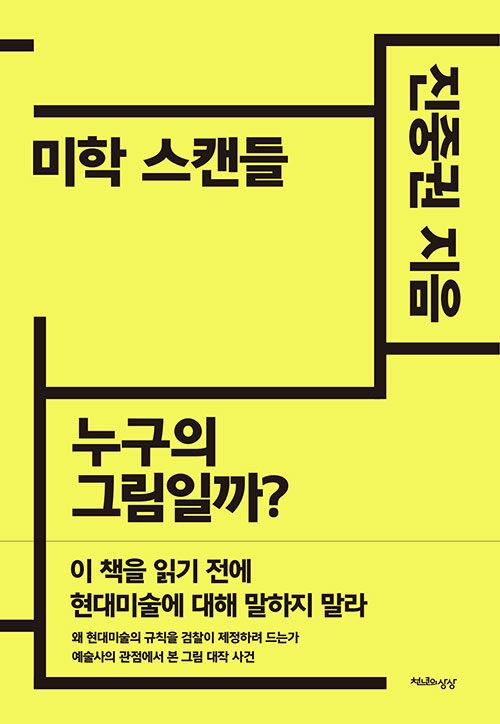 Chin Jung-kwon's book "Aesthetics Scandal," which is based on the Cho Young-nam case. [SCREEN CAPTURE]

A recurring point Chin made throughout the book that was not discussed in the courtroom was that even if people had different thoughts and opinions about using an assistant to create art, anyone who calls themselves an expert on art should have opposed Cho’s case being taken to court. All arguments aside, it is just for the judicial system to rule on what’s right and what’s wrong in art?

Whether or not one agrees with having an assistant, art is a field of creativity that should be debated and discussed among the public — not a court hearing or a sentence from the law.


“As experts, they should have criticized the prosecutors’ interference in the art field and then brought this matter to the public sphere to be logically and rationally discussed,” wrote Chin.

“The manner of conduct that the Korean art world showed during the process was regrettable. They provided the wrong information to the judiciaries for the first hearing. Saying that physical execution is crucial to art, that authorship lies in the skills of the execution, that fine art does not use assistants, that one is only allowed to use an assistant when the process of the work takes the theme as a meta experiment […] All pieces of wrong information that stemmed from a lack of understanding of contemporary art were used as evidence for the first court’s ruling. The art world is in need of self-reflection and introspection.”