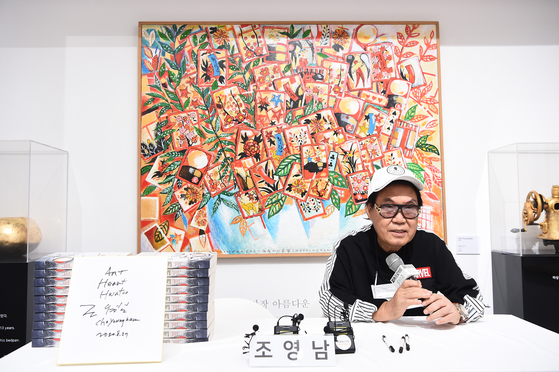 
Singer Cho Young-nam answers questions from local press on Tuesday at Pica Project in Gangnam District, southern Seoul, on his solo exhibition titled "Art, Heart, Hwatu and Cho Young-nam." Cho is a famed singer in Korea who debuted in 1969 and became one of the hottest acts of the 1970s and 1980s. He's also tried his hand at comedy and acting. He picked up painting as a hobby in the 1970s and has held multiple exhibitions. In 2016 he was indicted for fraudulently selling artwork with his signature on it after having other people create most of the work and “doing only a small portion himself.” He was cleared of the charges on June 25. [NEWS1]