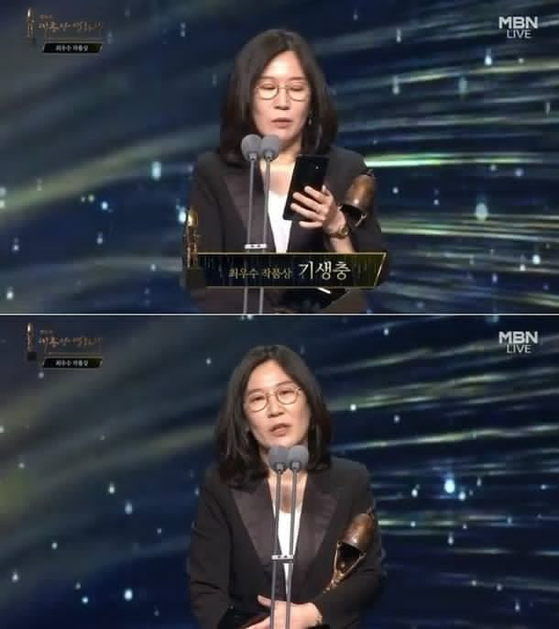 
To no one's surprise, the star of this year’s Daejong Film Awards was the Oscar-winning film "Parasite.”

"It's an honor to be recognized by the Daejong Film Awards, which has a long history," Kwak Sin-ae, producer of "Parasite" and CEO of its production house Barunson E&M, said on behalf of director Bong, who did not attend the ceremony due to personal reasons.

"I want to thank all 'Parasite' artists, staff and the production houses of Barunson and CJ ENM," she said. "After director Bong finished the eight-month-world tour with ‘Parasite,’ he’s taking a break from all social activities, so he wasn’t able to attend the ceremony."

“[Bong] says that it’s a huge honor to receive an award from this prestigious festival with its long history,” Kwak continued. “During this time of year in 2018 we were filming ‘Parasite,’ and last year during this period we were meeting the audience in theaters. It’s heartbreaking to see that there are no audiences [in theaters]. I hope we can all get through these difficult times and see each other again through screens.”

"Parasite" depicts the entrenched social class system through the lives of two families, one rich and one poor, with Bong's humor and tension.

Being nominated in 11 categories, the film was the strongest candidate for multiple grants as it became the first South Korean film to bring home four Oscars, including Best Picture and Best Director, at this year's Academy Awards in February.

It also racked up more than 150 accolades in international film festivals last year, starting with the Palme d'Or, the top award at the Cannes Film Festival.

The film has so far attracted more than 10 million viewers in South Korea alone, with its worldwide revenues totaling $257 million.

The Best Rookie Director award was given to Kim Bo-ra who directed "House of Hummingbird," while Jung Hae-in of "Tune in for Love" and Jeon Yeo-been of "After My Death" received the Best Rookie Actor and Actress trophies, respectively.

The Daejong Film Awards, known as the Grand Bell Awards in English, was originally set for Feb. 25 at the Peace Hall of Kyunghee University in Seoul, but was postponed due to Covid-19 fears.

Organizers decided to hold its 56th edition without spectators as the nation is struggling to tackle recent spikes in infections in the densely populated capital city and neighboring areas.