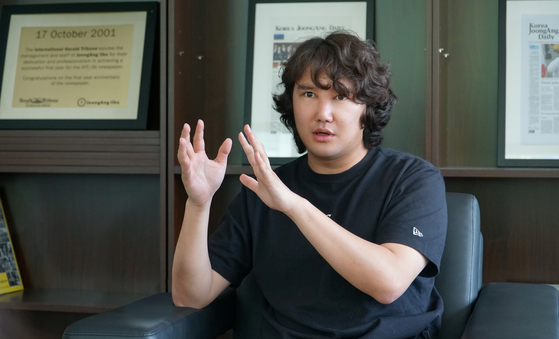 Director Lim Seung-hyeon sits for an interview at the Korea JoongAng Daily on June 3.[JEON TAE-GYU]


Having a safe place to sleep, eat and relax is a basic necessity most take for granted, but for young Koreans having a place to call home is a growing issue.

According to a 2018 Statistics Korea report, 22.6 percent of youths living alone suffer from poor housing, and the number escalates to 37.2 percent in Seoul due to high living costs.

Director Lim Seung-hyeon was no stranger to this problem during his own youth, which is what led him to create his first feature film “Homeless” which won the CGV Arthouse Award for the 21st Jeonju International Film Festival on Tuesday evening.

“When I was in 12th grade, I briefly had to live in a jjimjilbang [Korean sauna] for a while, and that’s when I realized the importance of the comfort that a home provides,” the director said in an interview with the Korea JoongAng Daily on Wednesday. “I’ve had a lot of experience moving around — I remember one time we [my family] moved to this half-underground basement room, and all four sides of the walls were covered with black mold.”

The first scene from the film "Homeless." Han-gyeol, Go-woon and their baby Woo-rim take a look around the model house on display, longing for such home. [JEONJU INTERNATIONAL FILM FESTIVAL]


“Homeless” leads the audience to sympathize with a family — Han-gyeol, Go-woon, and their baby Woo-rim. The young couple, seemingly in their 20s and with no one to reach out to for help, struggle to make ends meet to provide a permanent place to raise their child. The final straw comes when their security deposit is robbed by their realtor and they have nowhere to go. That is until Han-gyeol takes his family to a two-story house which he tells Go-woon that they can stay in for a month. The house seems to be a luxury that’s too good to be true — and Go-woon quickly finds out that her instincts are correct. They’re faced with the choice of continuing to live in the house with the burden of keeping a terrible secret which would haunt them for the rest of their lives, or become homeless with their young baby.

“What I felt long before writing this script was that people are not really as interested in each other as one might think,” Lim said. “Lonely deaths, poor housing, and many of the social problems that youths face today are related to apathy. No one is to take the blame for it, but it’s just that people are growing indifferent [to their surroundings] because we already have our plates full taking care of ourselves.”

The house that Han-gyeol took his family to belonged to an old lady whom he’d gotten friendly through his delivery job. She lived alone, separated from the rest of her family and one day, Han-gyeol finds her dead after she fell while trying to change a light.

Han-gyeol (played by actor Jeon Bong-seok) sometimes run errands for the old lady, who lives alone without a family. [JIFF]


The director realized that the issue of lonely death was an issue that was much closer to home for him than he initially thought.

“I visited my father [who lives alone] during the holidays, and one day the landlady stopped me before I left and asked for my number,” Lim said. “I asked her why and she merely said, ‘you never know [what might happen].’ Hearing those words made me feel incredibly sad.”

The director believes that there are many Han-gyeols and Go-woons, hidden from the masses but definitely there.

“The fact is, what they [Han-gyeol and Go-woon] did was a criminal act, and [I] can’t defend nor support their choice of actions,” Lim said. “I really do believe that there may be people like them. While Han-gyeol and Go-woon might not get caught, they will lead wretched lives, feeling remorse [for rest of their lives]. Moreover, they will have to keep this hidden from the child that they love so much. Nevertheless, I still want to hold their hands and tell them, ‘It wasn’t only your fault.’”

Han-gyeol and Go-woon (played by actor Park Jeong-yeon) decide to settle in this home for good, having nowhere to go. [JIFF]


Although the film touches on many social issues, Lim's original intent was to work on more fictional genres rather than those that hit closer to the reality.


“That’s how I was first drawn to the cinematic world, but my experience in Dankook Graduate School of Cinematic Content was the turning point for me,” Lim said. “My original focus had always been about filming things that I wanted to see or stories that I was attracted to. But in my graduate school everything down to my personal taste, how I consume films, my perspective, changed, and I think this was a positive influence for me. For my first feature film, I wanted it to be about my story and stories of my surroundings.”

That doesn’t mean that Lim has completely given up on genre fictions though.

“Right now I’m planning two films,” Lim said excitedly, his eyes twinkling at the mention of his next work. “One is going to be a commercial horror film, but it’s not going to be one about ghosts. Rather, it’s the kind [of horror] that arises from people’s relationships. Another one is a road trip movie about three friends in their late 20s. They met while serving their mandatory military service, and one day they decide to find and bully this old-timer who used to give them a really hard time.”

When it's pointed out that the two films seem to be on par with the social malaise that youths face today, the director nodded.

“In the future, I think I’m going to keep making films that, hopefully, can make the audience look back [on society],” Lim said. “Currently my focus is about the problems related to youths living in this generation today, and that’s how I plan to create my films, regardless of what genre they are.”