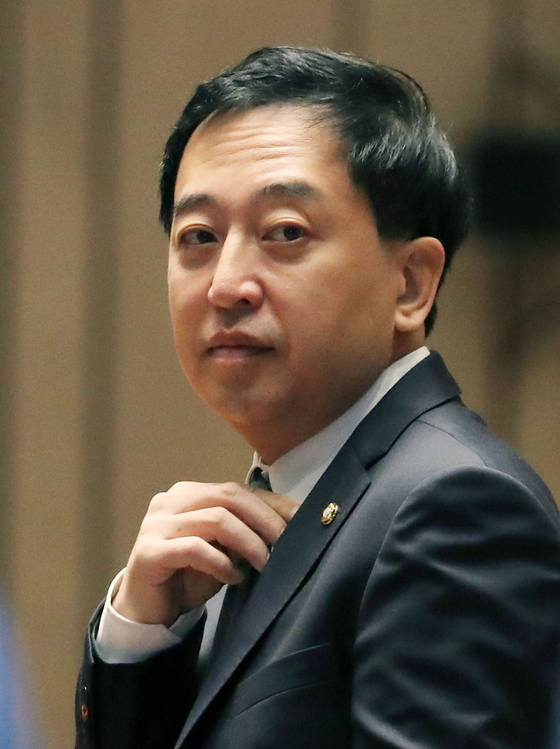 Keum Tae-sup attends a general assembly of lawmakers of the ruling Democratic Party on Feb. 18. The party recently punished Keum, now a former lawmaker, for abstaining from voting on a bill to establish a new investigation agency for senior public servants instead of supporting it. [YONHAP]

Keum Tae-sup, a former lawmaker in the ruling Democratic Party (DP), cried foul Wednesday after the party decided to punish him for abstaining from a December party-line vote to approve a contentious bill establishing a new investigative agency for senior public servants.

“If I deserve punishment for not voting based on a compulsory party line, the party must punish all other people who voted against party lines,” Keum said during an exclusive phone interview with the JoongAng Ilbo. “I think the party’s position is unprincipled and irresponsible.”

“It is a grave issue for a political party to punish a lawmaker,” Keum added, noting that the party did not punish any of the lawmakers who didn't attend a vote on an election law revision bill that was held around the same time.

On Dec. 26, 2019, the ruling party and its allies pushed a bill through the National Assembly that introduced a new election system to be used for the April general election. On Dec. 30, they passed the bill to establish the new investigation agency, intended to weaken the prosecution’s powers.

Keum, a former prosecutor, had persistently opposed the plan. He was the only DP lawmaker to abstain from voting on the bill.

The 54-year-old politician started his career in 2013 to support former presidential candidate Ahn Cheol-soo, and won his first legislative election to become a DP lawmaker in 2016. He has been known for his critical stance toward former Justice Minister Cho Kuk, despite his party's actions to protect Cho as he and his family faced investigations and trials for alleged financial and academic corruption.

Keum had sought reelection in his Gangseo District in the April general elections but failed to win the DP nomination.

The DP’s Ethics Tribunal held a meeting May 25 in which they deliberated petition from some party members in February to punish Keum and issued a warning to him.

“Voting for the new investigation agency bill was the party line,” the tribunal wrote in its decision. “Because Keum cited his beliefs and abstained at the time, we are punishing him for violating the party line based on the party’s regulations.”

Keum asked for an appeal on Tuesday, calling the punishment “unprecedented and unconstitutional.”

In his appeal, Kim said the National Assembly Act guarantees a lawmaker the right to vote freely. “The clause was introduced during the Kim Dae-jung administration in 2003,” he said.

Clause 2 of Article 114 of the National Assembly Act states, “Any National Assembly member shall vote according to his or her own conscience as a representative of the nation, without being bound by the intention of a political party to which he or she belongs."

Arguing that the punishment was unfair, Keum also told the party that he had already consulted with the floor leader last year and made clear that he would abstain.

"Punishing a lawmaker for voting against the party line is a self-declaration that the [DP] is an anti-democratic, unconstitutional party,” he said.

The DP leadership, however, said its decision to punish Keum was appropriate.

“When the party recommends its line, you can express your opinion. But when the party line is compulsory, you have to respect it,” DP Chairman Lee Hae-chan on Tuesday. “The Ethics Tribunal’s warning was the lightest punishment.”

“I thought this was an important issue,” Keum told the JoongAng Ilbo on Wednesday, discussing his appeal. He said he will retain his party membership, despite growing demands from DP members that he leave. “I filed the appeal, because I want the party to make a right decision."

“This is not an issue concerning one individual,” said Rep. Kim Hae-young, a member of the DP’s Supreme Council. “This is an incredibly important constitutional issue concerning how far conscience in connection to one’s duty is allowed in a democracy with a party system. If we punish lawmakers for not voting according to party lines, it may be in violation of the Constitution and the National Assembly Act.”

Kim said the Ethics Tribunal must have a serious constitutional deliberation on Keum’s appeal based on the clauses.

In a radio interview on Tuesday, Rep. Cho Eung-cheon said he has never seen a lawmaker punished for voting their conscience.

“It made me wonder if the party is going in the right direction,” Rep. Park Yong-jin said Tuesday. “The Ethics Tribunal must judge whether the DP’s regulations [align with] the Constitution or not.”