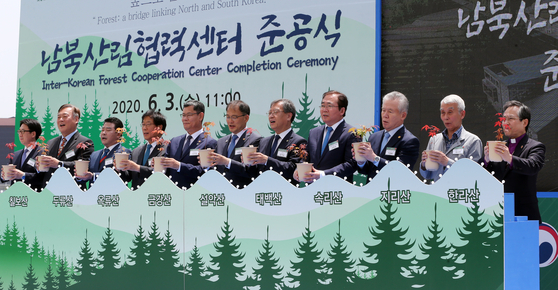 Unification Minister Kim Yeon-chul, fifthfrom left, and dignitaries celebrate the completion of an inter-Koreancooperation center on forestry in Paju, Gyeonggi, on Wednesday. [KIMSEONG-RYONG]


Unification Minister Kim Yeon-chul stressed the need for forestry cooperation with North Korea on Wednesday, calling it a key to effectively coping with national disasters and looming climate change.

Kim made the emphasis in a speech to mark the completion of an inter-Korean cooperation center on forestry built in the border town of Paju, adding that forestry on the Korean Peninsula is a common asset for the two Koreas.

"In the face of life-threatening natural disasters and the looming reality of climate change, the two Koreas should stand up together. Cooperation in the forestry sector is the key," he added.

South and North Korea agreed on forestry cooperation during a summit in 2018 that included joint efforts on combating deforestation, conducting research on seedlings and other countermeasures against natural disasters.

Little progress, however, has been made recently with inter-Korean relations stalled amid a stalemate in denuclearization talks.

North Korea is known to be facing severe deforestation issues, which has left the country vulnerable to various natural disasters, including landslides.

South Korea started the construction of the inter-Korean forestry cooperation center in Paju, north of Seoul, last September as part of efforts to prepare for the resumption of cross-border cooperation. It houses various facilities, including those for nurturing seedlings.

"When the coronavirus infection subsides, the South and the North should resume the implementation of their agreements and expand the scope of cooperation," the minister said.

He also expressed hope that the newly launched center in Paju would help usher in an era of full-fledged cooperation in the forestry sector between the two Koreas.