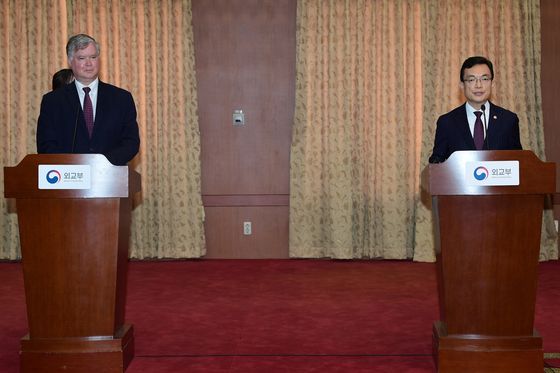 Biegun, who doubles as the U.S. special representative for North Korea, also signaled that Washington remains ready to resume denuclearization negotiations with Pyongyang, at a standstill since last year, after meeting with a series of South Korean diplomats at the Foreign Ministry in central Seoul.

"The United States strongly supports inter-Korean cooperation, and we believe this plays an important component in creating a more stable environment on the Korean Peninsula,” Biegun told reporters, standing alongside Lee Do-hoon, South Korea’s top nuclear envoy. “We look forward to fully supporting the government of the Republic of Korea [ROK] as it advances its goals with North Korea in inter-Korean cooperation.”

His remarks seemed mindful of some concerns in Seoul that Washington is not keen on the Moon Jae-in government’s push to carry out inter-Korean cooperation initiatives despite a lack of progress in denuclearization negotiations with the North.

Biegun, on a three-day visit to Seoul, shot down media speculation that the United States had requested a meeting with Pyongyang officials to coincide with his trip to the region.

“We did not request a visit with the North Koreans,” he said. “This was a visit to meet with our close friends and allies, the South Koreans, and we had an excellent discussion.”

Biegun indirectly addressed his detractors both in Washington and in Pyongyang.

“I also want to be very clear on one point,” said Biegun. “I do not take my direction from Vice Minister Choe Son-hui and nor, for that matter, do I take it from Ambassador John Bolton.”

North Korean Vice Minister Choe Son-hui said last week ahead of Biegun’s visit that she does not see a need to have “face-to-face” talks with the United States, amid speculation on the possibility of another North-U.S. summit ahead of the American presidential elections in November.

John Bolton, the hawkish former U.S. national security adviser, showed extreme skepticism toward denuclearization talks with the North in his recent memoir, “The Room Where It Happened,” and detailed his own best efforts at “derailing the unhealthy negotiation path Biegun was on.” The second North-U.S. summit in February 2019 in Hanoi, Vietnam, ended with no deal as the two sides clashed over the scope of denuclearization needed for partial sanctions relief.

Biegun underscored that he takes “guidance” from the agreements drawn between U.S. President Donald Trump and North Korean leader Kim Jong-un, who had two summits and a third impromptu meeting in the past two years.

Biegun last held working-level talks with North Korea in Stockholm in October 2019, but Pyongyang’s chief nuclear negotiator, Kim Myong-gil, a former ambassador to Vietnam, walked away from the talks saying Washington brought nothing new to them.

Like in December, Biegun bore a message directed at the North.

“When Chairman Kim appoints a counterpart to me, who is prepared and empowered to negotiate on these issues, they will find us ready at that very moment,” said Biegun. “We look forward to continuing our work on a peaceful outcome on the Korean Peninsula. I believe this is very much possible.”

Trump has given “his full support to continue this effort,” he said, thanking Seoul “for their strong partnership in this regard.”

President Trump said in an interview with Gray Television’s Greta Van Susteren Tuesday, coinciding with Biegun’s trip to Seoul, that he is open to holding another summit with North Korean leader Kim despite Pyongyang signaling that it is not interested in talks with Washington if it is only to benefit U.S. political interests.

"I understand they want to meet, and we would certainly do that," Trump said. "I would do it if I thought it was going to be helpful.”

When asked if he thought a summit would be helpful, he replied, “probably,” touting again his “good relationship” with Kim. He added that there is a need for “very serious discussions” about the North’s nuclear weapons program at some point.

This marks the eighth U.S. vice foreign ministerial strategic dialogue and the first face-to-face meeting with Cho since Biegun was promoted to deputy secretary of state last December.

Biegun was accompanied by Alex Wong, the U.S. deputy special representative for North Korea, Mimi Wang, the strategic adviser to the deputy secretary, and U.S. Ambassador to Seoul Harry Harris.

Cho said in an informal press conference alongside Biegun that they had “exchanged candid opinions” on the bilateral alliance, responses to Covid-19, the Korean Peninsula issue and various regional and global issues.

Biegun said in the press conference, “We discussed peace on the Korean Peninsula, an effort that we continue to be fully engaged with," in cooperation with Seoul, "and look forward to making progress on as we continue into this year.”

They also discussed "the very foundation of the U.S.-ROK alliance,” said Biegun, assuring that "the United States’ commitment is ironclad to the defense of the Korea Peninsula."

Seoul and Washington have struggled to seal a new defense cost-sharing deal, or the Special Measures Agreement, and Cho said the two sides agreed to “continue efforts to produce a mutually acceptable agreement as soon as possible.”

They also agreed to continue close consultations on Washington’s invitation to Seoul to partake in an expanded Group of Seven, or G7, summit meeting.

The two nuclear envoys discussed the “potential for us to continue to make progress together on our goals on the Korean Peninsula,” Biegun later told reporters.

Lee and Biegun head working group talks between Seoul and Washington to coordinate policy on North Korean denuclearization, sanctions enforcement and inter-Korean cooperation. Some South Korean civic groups have viewed the consultative body as a mechanism that can impede inter-Korean initiatives. The two envoys discussed improving upon the working group in their last meeting in Washington in June.

Lee told reporters that Biegun “reconfirmed that he holds a flexible position toward reaching a well-balanced agreement should dialogue with the North resume.”

He said that they agreed to “maintain a seamless system of cooperation and continue close communication with China, Japan, Russia and the international community” on this matter.

Biegun and this team arrived on a U.S. military plane on Tuesday afternoon in the first visit by an American delegation since the outbreak of the coronavirus pandemic. The U.S. delegation received coronavirus tests at Osan Air Base in Gyeonggi that had not initially been planned. The U.S. officials had received exemptions from the mandatory 14-day quarantine by Korean health authorities, but Covid-19 tests were given upon arrival for extra precaution. They all received negative results Tuesday evening.

Kang during their talks thanked Biegun for “taking the extra caution” to get tested again upon arrival in Korea.

Biegun said that the Korean government has been “very collaborative in working out the details” of getting the U.S. team in Seoul safely and especially praised the Korea Centers for Disease Control and Prevention (KCDC).

He said, “Your KCDC was excellent to work with, and everybody's healthy and we are here. It’s been too long.”

Biegun is expected to visit the Blue House Thursday and to meet with senior security officials.

He is then scheduled to head to Tokyo to wrap up a trip to East Asia that runs through Friday. 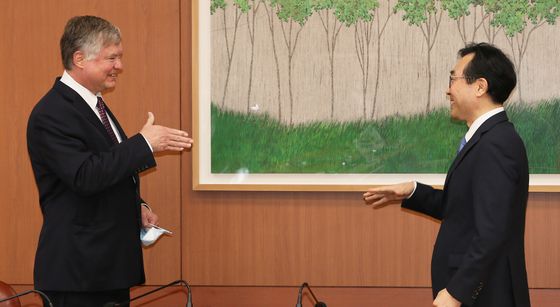