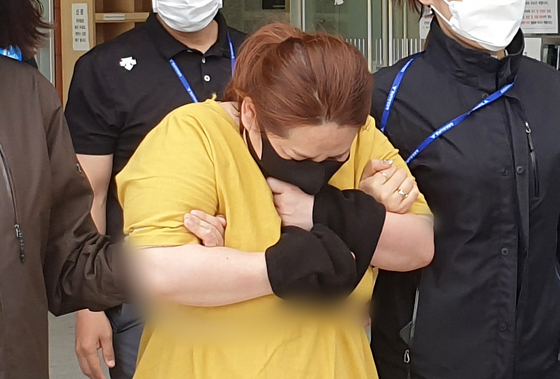 A 43-year stepmother, charged in the death of her nine-year-old stepson after allegedly locking him in a suitcase for seven hours, walks out of the Cheonan Dongnam Police Precinct after being questioned by investigators on Wednesday. [NEWS1]


A 43-year old woman was arrested in Cheonan, South Chungcheong, Wednesday for allegedly killing her nine-year-old stepson by locking him in a suitcase for seven hours.

The woman was charged with child abuse resulting in death after the child died two days later in the hospital.

Just a month earlier, authorities began investigating the stepmother and her husband in a separate incident of alleged child abuse after bruises were discovered on the boy’s body.

An ambulance was dispatched to the woman’s home Monday at 7:25 p.m. after the stepmother called emergency officials and said she had found the child unconscious after opening the suitcase, according to investigators.

The medical team arrived to discover the child in a coma, and transported him to a university hospital in Cheonan while performing CPR in the ambulance. The child was treated at the hospital for two days, but never recovered consciousness and was pronounced dead Wednesday at 6:50 p.m.

The child’s cause of death was listed as multiple organ failure.

Police obtained a warrant to arrest the stepmother based on suspicions that the child’s death was the result of abuse.

Under questioning, the woman confessed that she had ordered him into the suitcase as punishment for lying and not listening to her directions, according to police.

She admitted to locking him in the suitcase on Monday at noon, initially in a 15.6 inch by 23.6 inch suitcase, the stepmother. She said she transferred him to one measuring 17.3 inches by 23.6 inches, after the child relieved himself in the original.

Two of the child’s step siblings were in the house at the time. His father was at work.

Prosecutors say surveillance footage shows the stepmother calmly walking out of the apartment at 1 p.m., shortly after the child was locked in the suitcase. She returned home three hours later.

Police said the incident was not the first instance of child abuse.

On May 5, otherwise known as “Children’s Day” in Korea, the two parents had checked the child into the hospital for medical treatment.

Medical staff at the hospital discovered bruise marks on the child, and reported their suspicions of child abuse to the police two days later.

When questioned by the police, the stepmother allegedly replied, “I just hit him because he wasn’t listening to me,” adding that she had done the same to his step-siblings.

The police had then handed the case over to the National Center for the Rights of the Child, which had sent a consultant to the home and initiated monitoring procedures.