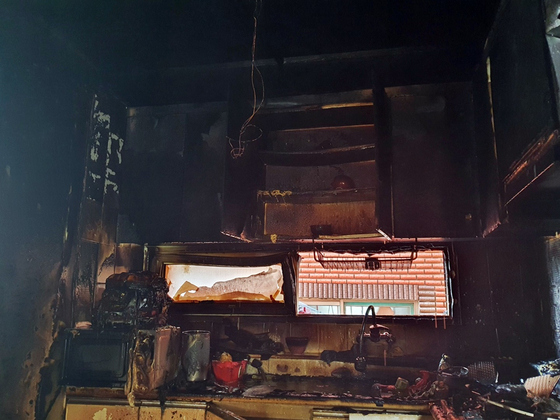 The walls of the kitchen are charred after a pair of young brothers set their house on fire trying to cook ramyeon at their home in Yonghyeon-dong in Michuhol District, Incheon, on Sept. 14. Their mother had been away since the previous day, and the boys, severely burned, remain unconscious a week later. [NEWS1]


A pair of young siblings from Incheon set their house on fire after trying to cook themselves a bowl of ramyeon, or instant noodles, and both remain unconscious in the hospital over a week later.

The Sept. 14 incident has captured national attention as a cautionary tale.

The boys, aged eight and 10, had been left home alone by their mother since the previous day. The family lived on the second floor of a four-story villa in Yonghyeon-dong in the city's Michuhol District.

As their house burned down, the boys called emergency responders to report the blaze, but were unconscious by the time they were discovered by firefighters. The older brother sustained third-degree burns on about 40 percent of his body, including his back. The younger boy received first-degree burns, and both inhaled large amounts of smoke.

The siblings are currently on ventilators and receiving treatment in an intensive care unit in a Seoul hospital that specializes in burn victims.

Even if they do gain consciousness, they are expected to remain hospitalized for an extended period of time.

The children had been unable to go to elementary school in recent weeks because of the coronavirus and had been taking remote lessons from home. Their mother had previously been accused of neglecting them.

Neighbors had reported the family to child protection services three times between September 2018 and this May, alleging that the mother had neglected and abused her children.

After the first report, the Incheon Child Protection Agency told the mother that she needed to improve the home environment, and the mother received counseling from local family experts. Following the third report of negligence on May 12, child protection authorities turned the case over to police.

Incheon police booked the woman without detention for violating child welfare laws and referred the case to prosecution. Prosecutors in turn referred the child protection case to the Incheon Family Court, calling for the separation of the mother from her children.

The mother allegedly hit the 10-year-old child, and was also accused of having raised the kids in an unhygienic environment.

However, the children told authorities that they did not want to be separated from their mother.

In turn, the Incheon Family Court on Aug. 27 ruled against separating them, but said that the mother needed to receive counseling once a week for six months. Her children were also required to undergo counseling for a 12-month period.

However, counseling couldn’t start right away amid the heightened Covid-19 social distancing measures.

The woman, a single mother raising two children on her own, was a recipient of government basic livelihood subsidies, receiving a stipend of around 1.6 million won ($1,373) monthly. They lived in public rental housing provided by the Incheon city government for low-income families.

Police said that the mother made paper bags and wrapped gifts to earn a modest hourly wage until Aug. 25, when those types of local self-support work projects were halted because of Covid-19 social distancing measures. In June, she earned some 670,000 won through such labor and 700,000 won in July.

Asked where she had been since the day before the fire, the mother told police Thursday that she had been “meeting with an acquaintance.”

CCTV footage from convenience stores showed that the two boys often stopped by without a guardian to buy snacks, and neighbors likewise have said that the siblings were often spotted without their mother.

The Incheon Fire Department said Monday that the initial emergency call was received at 11:16 a.m. on Sept. 14. Because they were children, they were only able to cry out, “Help!” without being able to provide their exact address.


Later, the older boy stated the villa’s name, saying there was a fire and urging, “Hurry,” multiple times, according to a recording of the phone call.

But there are 66 residences, apartments and buildings in Michuhol with the same name, including at least four residences with a similar name in their neighborhood alone.

If a smartphone user allows location tracking, firefighters have an easier time locating the address, but that was not the case this time. Michuhol firefighters were able to trace the approximate location of the boys by tracking the base station where the smartphone was used.

It was only after neighbors spotted the fire around 11:18 a.m. and reported it to authorities that they were finally able to track down the exact house. As the closest fire station turned out to be less than 200 meters (656 feet) away, firefighters arrived at the scene of the fire at 11:21 a.m.

As of Sunday, Michuhol District Office said that there has been an outpouring of people reaching out to try to help the two siblings, and that the Haksannanum Foundation has so far gathered some 30 million won in donations from over 140 people.

President Moon Jae-in addressed the Incheon siblings’ plight in a Cabinet meeting Tuesday, said the Blue House spokesman, and ordered aides to “review measures in the case of abused or neglected children to ensure their protection regardless of what the parents say.”