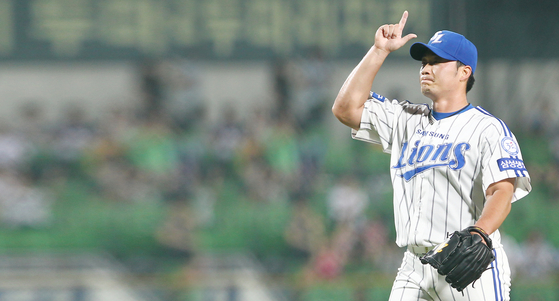 After years of playing abroad, Oh Seung-hwan is expected to make his return to the KBO next week. [ILGAN SPORTS]

The Samsung Lions might be struggling in the bottom half of the table, but their luck may be about to turn around as former major league closer Oh Seung-hwan finally makes his long-awaited return to the KBO.

Oh, who played for the Lions from 2005 to 2013 before heading overseas for stints in Japan's Nippon Professional Baseball (NPB) and the major league, returned to Korea last year but was unable to play due to an outstanding 72-game ban in the KBO.

Playing for the Hanshin Tigers in the NPB in 2015, Oh was charged with illegal overseas gambling and handed the KBO ban. Under Korean law, it is illegal for Korean citizens to gamble in casinos, whether they are inside or outside of the country, except for at the government-sanctioned Kangwon Land.

When the KBO suspended Oh, he didn’t actually play in Korea, so all 72 suspended games are still outstanding. As the Lions only had 42 games left to play when they sighed Oh in August last year, Oh's ban carried through the opening month of this season. He will be allowed to return to the mound on Tuesday.

The return of Oh, the Lions' former star player, could be a big boost to the Daegu club. Throughout his career, Oh has managed to pick up a total of 399 saves — 277 of them for the Lions.

Early in his career, Oh was also a regular pick for the Korean national baseball team, helping Korea take gold at the 2008 Beijing Summer Olympics, silver at the 2009 World Baseball Classic in Los Angeles and bronze at the 2006 Doha Asian Games.


In Japan he added 80 more saves in two seasons, leading the NPB in saves for both years, before heading to the majors. In the United States, Oh played for the St. Louis Cardinals, Toronto Blue Jays and Colorado Rockies, picking up 42 more saves before an elbow injury saw him designated for assignment and eventually released to return back to the Lions last year.

Oh has spent the time since he returned to Korea working on his elbow injury. He underwent surgery and has been focusing on rehabilitation.

With his return to the KBO likely to come next week when the Lions face the Kiwoom Heroes at Daegu Samsung Lions Park in Daegu, Oh could enter the history books once again, with just one more save needed to make him the first Korean pitcher ever to reach 400 career saves.

At a Lions’ intrasquad training game in April, Oh was throwing a fastball at a speed of 147 kilometers per hour (91 miles per hour).

“Recently, Oh Seung-hwan had been pitching well,” said Lions manager Heo Sam-young. “By traveling with the players this week, he’ll be able to adjust to the night game schedules and the team atmosphere. So far, his preparation [to return] had been plain sailing.”

With Oh’s return, Lions fans are hoping to see their club reach the postseason again. The Lions have never played a postseason game at their new Daegu Samsung Lions Park stadium. Since moving in 2016, the Lions have been struggling at the bottom of the standing, with their best finish back in the 2018 season, at sixth.

As of Wednesday afternoon, the Lions are ranked seventh in the standing with 11 wins and 14 losses. Looking at their first 24 games, the Lions are ranked third in bullpen pitchers’ ERA at 4.99. Although this is not a bad spot in the standing, of the 10 games where the Lions have had a chance to pick up a save, they have only actually managed it twice. The return of Oh is expected to stabilize the club’s pitching, as he has both the experience and the leadership.