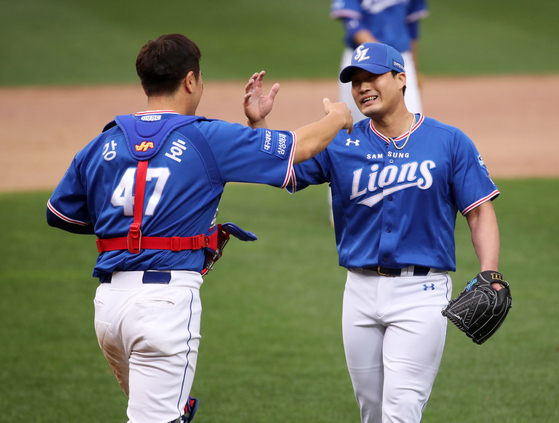 Samsung Lions catcher Kang Min-ho congratulates closer Oh Seung-hwan after he records his 300th career save against the Kia Tigers at Gwangju-Kia Champions Field in Gwangju on Sunday. [YONHAP]


Samsung Lions closer "Stone Buddha" Oh Seung-hwan recorded his 300th career save on Sunday night, a historic milestone for pitching in the KBO.

Oh took the mound in the ninth inning with the Lions up 3-2 against the Kia Tigers at Gwangju-Kia Champions Field in Gwangju on Saturday. He made short work of the Tigers, quickly shutting down the inning for his 300th career save in the KBO.

Oh has held the KBO record for the most saves for nearly a decade, breaking former LG Twins pitcher Kim Yong-soo's record with 228 career saves in 2012. While Kim had taken 609 games to set the record in the 1990s, Oh got there in just 369, and has continued to extend that record ever since.

Oh is known as the stone buddha because of his unflappable approach at the plate.

Oh pitched for the Lions from 2005 to 2013, winning five championships and establishing himself as one of the most dominant closers in KBO history.

Between 2014 and 2019, Oh played for the Hanshin Tigers in Japan's Nippon Professional Baseball league and the MLB's St. Louis Cardinals, Toronto Blue Jays and Colorado Rockies. He returned to the KBO last season and rejoined the Lions.

Technically, including his time overseas, he has 422 saves in top tier baseball, with 80 saves recorded in Japan and 42 in the majors alongside his 300 in the KBO.

Oh's incredible success is made even more remarkable by the way it started — four teams passed on him in the 2005 pitcher’s draft after an elbow injury at Dankook University made the first four clubs skeptical. Oh fell down to the Lions with the fifth pick, and the rest is history.

That Oh's 300th save came on the road is as a bit of a blow for the Lions' groundskeeping staff, who had gone to a lot of effort to prepare for the big day. 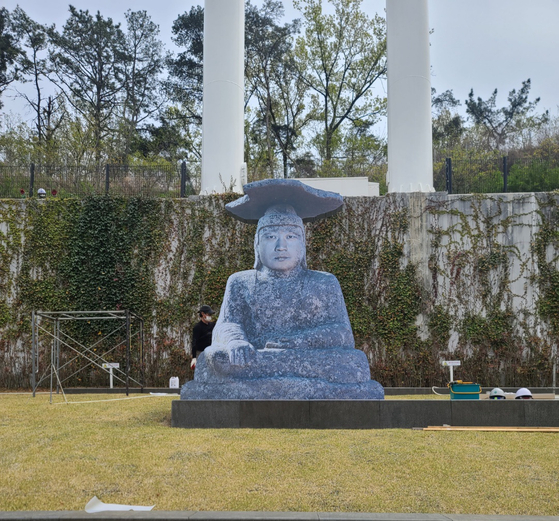 A plywood model of a stone buddha with closer Oh Seung-hwan's face has been constructed in the outfield at Daegu Samsung Lions Park in Daegu. [SAMSUNG LIONS]


Two weeks ago, the Lions erected a large plywood caricature of Oh as a stone buddha in the outfield at Daegu Samsung Lions Park in Daegu, in preparation for the day that the Stone Buddha would break the big 300.

The plywood model stands at 12 feet tall and will stay in the outfield until the end of this month. As the Lions will face the NC Dinos at home from Tuesday, players and fans still have a little time to bask in Oh's likeness before the celebratory model comes down.