Food companies, and beverage companies, are partnering with fashion brands and bringing food-inspired clothing to the runways, in a bid to capture the attention of a generation looking for fun and unique items. 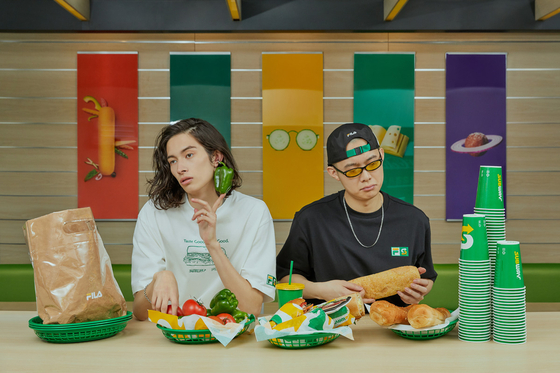 
Sandwich franchise Subway partnered with athleisure brand FILA and brought out a line of T-shirts, sneakers and casual accessories inspired by its logo and Subway’s popular menu items in early May.


The brand offered 24 products, including slippers, sports caps and T-shirts, printed with the signature menus from Subway, including the egg mayo sandwich. The products are sold at 51 FILA stores and the Musinsa online shopping mall.


The most popular item is a limited-edition sneaker decorated with the three colors — green, white and yellow — of Subway’s logo. The company said it was almost sold out right after the release.


“Our limited number of Subway sneakers sold out in the first couple of days after the release. Popular sizes of Subway T-shirts are also out of stock. I am aware there are customers hunting for the Subway sneakers in secondhand stores and online thrift shops,” said the FILA spokesperson.


Since the two companies share a similar demographic of target audiences — those under 40 years old — they partnered in hopes of sharing their customer bases. Their goal is to have customers of FILA come to Subway restaurants for lunch and Subway eaters come to FILA to shop for clothes.


“Our goal was to grab the attention of our target customers, millennials and Generation Z, by partnering with another popular brand that targets the same demographic. It was very effective in raising brand awareness,” said an official from Subway. “Millennials want something that is new and unique. Since our target audience is so used to seeing new and inventive things, it’s really hard to come up with something that would go beyond their expectations.”


For some food companies, creating fashion goods is an effective way to revamp their brand image.


Daehan Flour Mills, the 68-year-old flour producer behind Gom Pyo, or Bear Brand, flour, partnered with 4XR, a men’s fashion brand, in 2018 and released a line of T-shirts and sweatshirts inspired by its signature polar bear character printed on the company’s flour sacks. 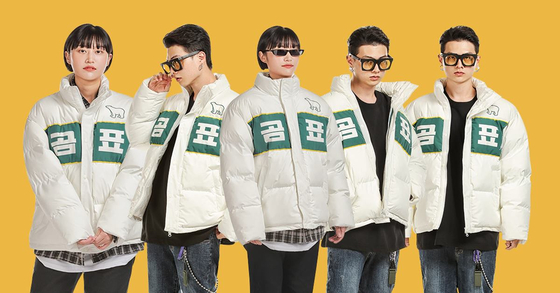 
It’s white "Gom Pyo” padded jacket  released last September, was a big hit on social media as influencers and fashionistas were drawn to the quirky design of the oversized padded jacket, which from a distance could be mistaken as an actual sack of Bear Brand flour. Even today, “#GompyoPaddedJacket” is among the top five most-searched hashtags on Instagram related to the brand.


Collaboration between different companies is considered a good marketing strategy. Daehan Flour Mills started Bear Brand-inspired goods as it noticed the brand was starting to lose touch with younger people.


“According to a survey in 2018, only one out of five people aged between 20 to 39 knew our brand,” said Park Jae-jeong, a marketer at Daehan Flour Mills. “While the elderly was well aware of Gom Pyo, that was not the case for the younger generation, who could become our future customers,” added Park.


Daehan Flour Mills plans to target even younger customers. The company said it is preparing to launch a Bear Brand-inspired children's clothing line with the fashion brand Runrabbit on June 10.


Other companies are seeking the wow factor through unique and creative fashion goods.


Hite Jinro, an alcoholic beverage company, partnered with a streetwear brand Covernat to gain a stronger foothold among young consumers in their teens and 20s. 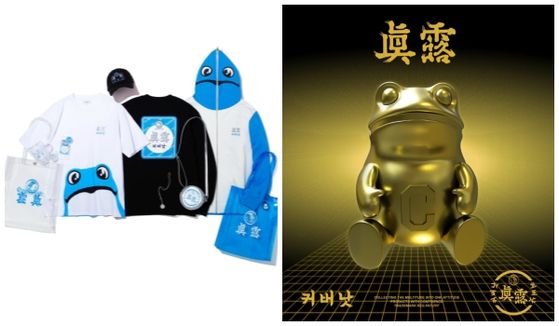 An advertisement for clothings inspired by Hite Jinro’s new soju, Jinro is Back. [MUSINSA]


It released a line of streetwear and accessories inspired by the new Jinro soju, know popularly as "Jinro is Back." The T-shirts were printed with Jinro’s mascot, a blue toad, and shopping bags were made with blue and clear PVC materials, referencing the clear blue bottle of Jinro’s soju.


A hooded sweatshirt with the toad’s head printed on the hood created some buzz online. The zipper runs up all the way and completely covers the face of the person wearing it, transforming them into the toad, the iconic character of Jinro’s soju bottles.


Early on, Hite Jinro had success with backpacks that look like a carton of Chamisul Original, a soju brand of the company, made in partnership with Musinsa. According to the company, 400 soju backpacks sold out in just five minutes after the release.

Despite it being priced at 49,000 won ($40), one traded for 250,000 won in the resale market due to growing demand from young hipsters wanting to get their hands on iconic fashion items.


“Each generation has a different understanding of fashion. While the older generation tends to focus on the functional aspect of clothes, for the millennials and Generation Z, clothes are a way to express something about themselves,” said Michael Kim, the director of brand activation at Interbrand, a global marketing consultancy.


Experts say more food fashion will likely come out in the future, as we live in an “attention economy,” where brands need to stand out and create a buzz in order to differentiate themselves from an ever-growing number of options.


“In an era where people are inundated with information, companies need to consistently seek limited-edition products or offerings that others cannot replicate. To do so, collaboration [between brands] can be a good alternative to differentiate themselves from others,” said Kim.

Flour import costs up 21.8% as war and pandemic hit supply

No Brand tries No People