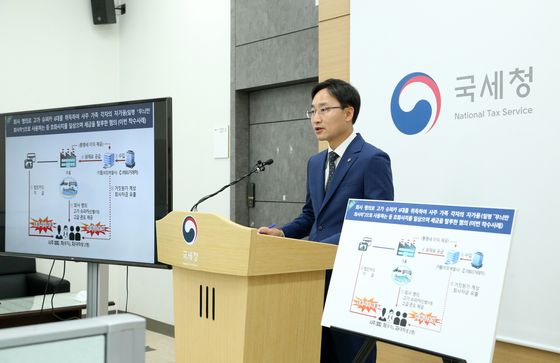 Lim Kwang-hyun, head of the National Tax Service's investigation bureau, holding a briefing on tax dodgers at the agency's headquarters in Sejong on Monday. [YONHAP]

Two dozen people are being investigated for using company funds to buy cars and properties for personal use, the National Tax Services (NTS) said on Monday.


One person used business accounts to purchase six cars for 1.6 billion won ($1.3 million). That’s 260 million won on average per vehicle. The vehicles were purchased under the company’s name and were driven by the person’s wife and two adult children.

The family also bought a high-end resort for 2.7 billion won under the company’s name, and were the only ones that used the resort, while they bought luxury goods and traveled on company credit cards.

The person also reportedly embezzled company money by creating a ghost affiliate under the name of one of the company’s executives.

In another case, the owner of an environmentally friendly materials manufacturer purchased two cars under the company's name for 1.3 billion won, and the vehicles were used by the owner and his family. His wife and two children purchased high-end luxury goods with company credit cards and even posted their purchases on social media.

Among the 24 people being investigated, nine purchased a total of 41 cars, worth a total of 10.2 billion won. Of the nine, one owned seven cars, while two owned six.

Not only did these people pay less on their taxes despite the cars never being used for company businesses, maintenance costs were picked up by the company.

The NTS said 15 of those that are being investigated were also being looked into for false employment of not only the children but also of elderly parents.

In one case, the owner of a famous food franchise company hired his parents, who are in their 80s, as well as the spouse and children as the company's high-ranking executives. The family pocketed a total of 4.5 billion won over the past five years.

In another case, the owner created a ghost company next to a school abroad where his children were being educated. The children were employed on paper at the company, which was used for paying tuition and living expenses, a clear violation of inheritance tax laws.

“Many companies and workers are sharing the burden including furlough and wage cuts amid the economic crisis caused by the novel coronavirus, and yet these people have received large amounts of wages despite not actually working,” said Lim Kwang-hyun, head of the investigation bureau at the tax agency. “The NTS will reduce the number of tax investigations this year so that it won’t hold back the economic recovery. However, we will take rigorous actions against any tax dodges.”

[WORD_ON_THE_WEB] 'Why does anyone need a supercar for business purposes?'