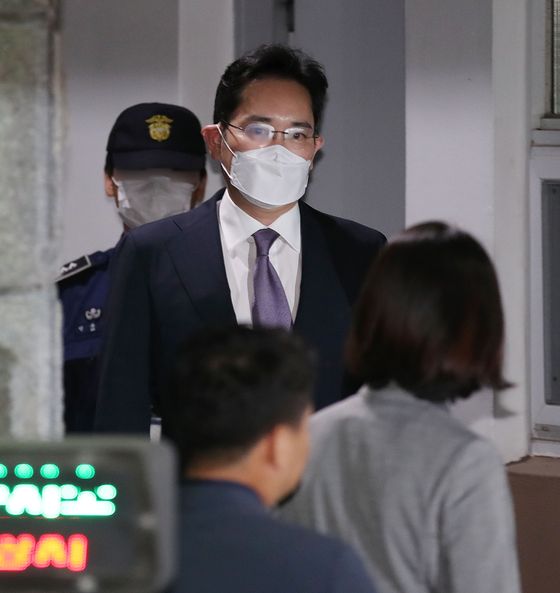 Samsung Electronics Vice Chairman Lee Jae-yong leaves Seoul Detention Center on Tuesday, after the Seoul Central District Court rejected the prosecution's request for a warrant to lock him up for further questioning. [YONHAP]

A local court on Tuesday struck down a request by prosecutors to detain Samsung leader Lee Jae-yong as a suspect in their criminal investigation into a merger that cemented his control over the conglomerate.

The Seoul Central District Court said there were insufficient grounds to put Lee, vice chairman of Samsung Electronics and de facto head of the country’s largest business group, behind bars.

Lee and two of his key aides — former senior executives of Samsung’s now-dismantled Future Strategy Office, Choi Gee-sung and Kim Jong-joong — attended the hearing, which began Monday and stretched into the early hours of Tuesday. The court also rejected the prosecution’s request to detain Choi and Kim.

Judge Won Jeong-suk presided over the hearing. After 15 hours and 30 minutes of deliberation, she issued her ruling rejecting the arrest warrant requests at around 2 a.m. Tuesday.

“The prosecution failed to prove there was a sufficient need to detain the suspects against the principle of prohibiting pre-trial detention,” Judge Won said. “The basic facts are confirmed, and the prosecution appeared to have obtained enough evidence through its investigation. Taking into [account] the gravity of this case, the suspects’ responsibilities should be decided through arguments and examinations in a trial.”

Lee's attorney's and prosecutors presented their arguments for eight hours and 30 minutes. Following an investigation that has to date spanned 18 months, 430 interrogations of 110 people and 50 raids, the prosecution submitted about 200,000 pages of investigation records to the court to support its need to detain Lee for a further probe. Their warrant application alone was 150 pages.

After the hearing, Lee awaited Judge Won’s decision at the Seoul Detention Center, finally leaving at 2:43 a.m. He did not make any public statement, except for a brief “thank you” to reporters waiting outside.

Prosecutors are scheduled to convene a citizens’ committee on Thursday, which will determine whether to grant Lee's June 2 request to submit the investigation to a panel of outside experts.

The Seoul Central District Prosecutors’ Office said the decision will be made by 15 randomly selected members of the citizens’ committee. If the committee decides to allow the review of Lee's case to proceed, the prosecutor general is required to convene the expert panel at the Supreme Prosecutors’ Office.

The prosecution has a pool of up to 250 experts representing different legal disciplines to participate in the review. If the case heads before the panel, fifteen of them will be randomly chosen to conduct the review.

The review outcomes, including whether the probe is valid or not and whether Lee should be prosecuted or not, are merely recommendations and are not binding on the prosecution. But the prosecution has respected the review panel’s decisions in each of the eight previous times the process was invoked.

Lee and his lawyers are expected to tell the review panel that the prosecution is going after him unreasonably, and they will likely stress the recent court decision denying the detention warrant.

They are also expected to argue that no legal breaches occurred during the course of his succession in the conglomerate, including the controversial merger. Lee is expected to deny any involvement in the process.

Prosecutors said they are confident that the panel will allow them to indict Lee. Despite the Seoul Central District Court ruling against them on the warrant request, prosecutors said the court made clear that they have proven the basic facts and gathered sufficient evidence.

They also pointed to the court's statement that Lee’s responsibility should be determined in a trial, a conclusion indicating that an indictment would be appropriate.

Prosecutors opened their investigation after the Securities and Futures Commission in November 2018 informed them about suspected accounting fraud at Samsung BioLogics. Since last September, the probe has expanded into alleged irregularities that helped Lee assume control.

Although Lee avoided detention on Tuesday, he previously spent one year in a jail cell for a separate, but related, conviction.

In February 2017, Lee was detained by an independent counsel team investigating alleged abuse of power and corruption by former President Park Geun-hye. At the time, he was detained as a suspect for allegedly offering bribes to Park and her longtime friend Choi Soon-sil in return for political favors to facilitate the 2015 merger.

Throughout the investigation and after he was sentenced to five years in prison, Lee remained behind bars. He was released in February 2018, after the Seoul High Court suspended his sentence. The Supreme Court ordered a retrial in 2019, which is still ongoing.

Lee Bok-hyun of the Seoul Central District Prosecutors’ Office, the chief prosecutor in charge of the current investigation into Lee, was a member of the independent counsel team in late 2016 that prosecuted Park, Lee Jae-yong and other tycoons.