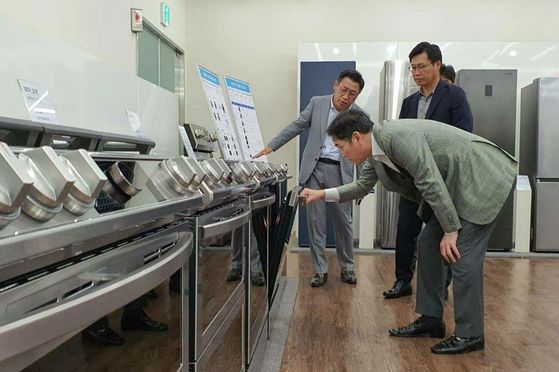 
A panel of outside experts on Friday started reviewing the validity of an ongoing criminal investigation into Samsung leader Lee Jae-yong.

Around 10 a.m., experts on an investigation review panel arrived at the Supreme Prosecutors’ Office along with lawyers for Lee and the prosecutors in charge of the probe.

For the past 20 months, the Seoul Central District Prosecutors’ Office has been investigating Samsung Electronics Vice Chairman Lee and other top executives to determine whether they broke any laws during a controversial business merger in 2015. The merger strengthened Lee's control over the country's largest conglomerate after his father, Lee Kun-hee, was hospitalized in 2014 following a heart attack.

As they entered the Supreme Prosecutors' Office in southern Seoul, the members of the panel, defense lawyers and prosecutors refused to answer questions from reporters.

Lee did not attend the review by the panel.

The panel was scheduled to hear arguments from prosecutors and Lee’s lawyers from 10:30 a.m. through 5:50 p.m. The conclusion of the panel is expected to be announced later in the day or possibly early Saturday morning.

A so-called investigation review system, introduced in 2018, is supposed to bring oversight to high-profile probes and examine the legitimacy of the criminal justice process. Many high-profile prosecutions in the past have been politically motivated.

When a suspect files a petition for an investigation review, the prosecution is required to convene a citizens’ committee to decide whether to allow it or not. The citizens' committees are modeled on the grand jury system in the United States.

On June 11, a citizens’ committee granted Lee’s petition and ordered the investigation review.

The prosecution subsequently formed a panel by selecting 15 experts from various fields to examine the validity of the investigation and possible indictment against Lee. The panel was supposed to be led by former Supreme Court Justice Yang Chang-soo, but he recused himself last week saying he had a potential conflict of interest.

On Friday, the 15-person panel selected one of its members to be acting chairman before starting the review Friday.

Experts were given written reports by the prosecution and Lee’s defense. The prosecutors were to verbally present their case in the morning and the defense in the afternoon. A question and answer session was to follow.

The panel aims to produce a unanimous decision on whether the probe is valid or not and whether Lee should be prosecuted, but can choose to render a majority decision. The acting chairman will not vote. If the vote is a tie, the panel will conclude without a judgment on Lee's indictment.

The panel’s conclusion is merely a recommendation and is not binding on the prosecution. But the prosecution has respected review panel decisions in each of the eight previous times the process was used.