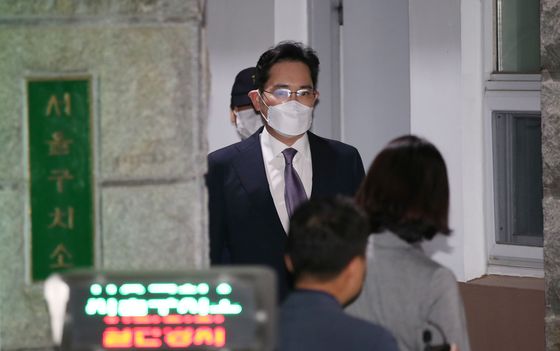 Samsung Electronics Vice Chairman Lee Jae-yong leaves Seoul Detention Center on Tuesday after a court rejected the prosecution's request for a warrant to detain him. [YONHAP]

A local court on Tuesday struck down a request by the prosecution to detain Samsung leader Lee Jae-yong as a suspect in a probe of a controversial 2015 merger that cemented his control over the conglomerate.

Lee and two of his key aides — former senior executives of Samsung’s now-dismantled Future Strategy Office, Choi Gee-sung and Kim Jong-joong — attended a hearing at the court on Monday. The court also rejected the prosecution’s request to detain Choi and Kim.

Judge Won Jeong-suk presided over the hearing. After 15 hours and 30 minutes of deliberation, Won ruled around 2 a.m. Tuesday to reject the prosecution’s warrant requests.

Lee and his attorneys argued for eight hours and 30 minutes against the prosecutors’ plan to detain him.

After the hearing, Lee waited for Judge Won’s decision at the Seoul Detention Center. The ruling was announced around 2 a.m., and he left the center at 2:43 a.m.