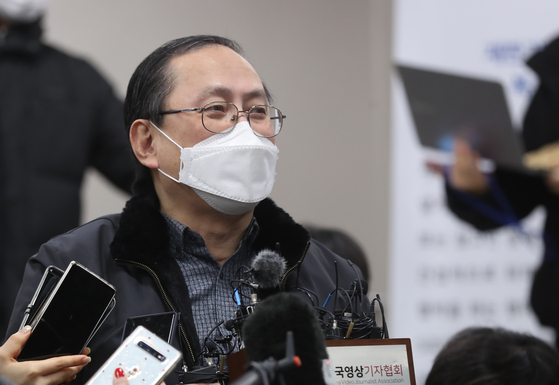 Kim Gang-won, a lawyer representing 12 former comfort women in a lawsuit seeking compensation from Japan, talks to the press at the Seoul Central District Court after his clients won the court battle against the Japanese government on Friday. [YONHAP]


A Korean court on Friday made a landmark ruling that the Japanese government is responsible for paying damages to the victims of Japan's military wartime sexual slavery, rejecting the former colonial ruler’s argument of state immunity.

The Seoul Central District Court ruled Friday that the Japanese government must pay 100 million won ($91,100) each to 12 comfort women victims, who were forced into sexual slavery by the Imperial Japanese Army during World War II.

The ruling concluded a legal battle of more than seven years. Of the 12 plaintiffs, only five are still alive.

Japan has refused to participate in the trial, citing state immunity — a principle of international law that a particular court or tribunal does not have jurisdiction over a state without its consent. The court, however, made clear that it won’t condone the argument in a trial on crimes against humanity.

“Japan is responsible for committing premeditated and organized acts against humanity in violation of the international standard and norms. State immunity does not extend to such a case,” Judge Kim said. “Therefore, the court concluded that it has jurisdiction over this trial.”

Judge Kim said he will grant the plaintiffs’ request to receive compensation of 100 million won each, stressing that each victim actually deserves a larger amount.

A group of 12 former comfort women including now-deceased Bae Chun-hee started the civil suit against Japan in August 2013. The plaintiffs said they were raped, beaten and starved while they were forced into sexual slavery. They also said it was illegal for Japan to set up and operate the sexual slavery camps.

The Japanese government refused to receive any documents related to the lawsuit, citing Article 13 of the Hague Service Convention. It says a state may refuse to comply with a court service only if it deems that compliance would infringe on its sovereignty or security.

As the court’s attempt to start a mediation process was rejected by Tokyo, the plaintiffs demanded a formal trial in October 2015. The judiciary granted their wish and assigned the case to the Seoul Central District Court in January 2016.

However, it took years to hold the first hearing of the trial. As the Japanese government refused to participate in the process, the court took an extraordinary measure in January 2020 of “service by public announcement” to start the trial in absentia. When it is impossible to serve the accused, the paperwork will be kept in the court and an announcement is made to publicly notify the accused instead.

Four hearings took place last year, and the final argument was made in October.

“I am overwhelmed to see this unprecedented ruling,” Kim Gang-won, a lawyer representing the plaintiffs, said after the sentencing.

“When Korea and Japan normalized relations in 1965, a bilateral claims settlement agreement somewhat covered the forced laborer issue. But the comfort women issue was never discussed at the time, so the victims deserve to receive compensation for their damages by filing lawsuits.”

Friday’s landmark ruling is expected to influence a similar lawsuit filed by a group of comfort women victims. The Seoul Central District Court will announce Wednesday its ruling for a damage suit filed by 20 victims and their surviving family members. Their suit was filed in December 2016, and the 20 plaintiffs are each seeking 200 million won.

The trial also proceeded in absentia as Japan argued for state immunity.