Cluster of 9 breaks out in Seoul's Chinatown

Cluster of 9 breaks out in Seoul's Chinatown 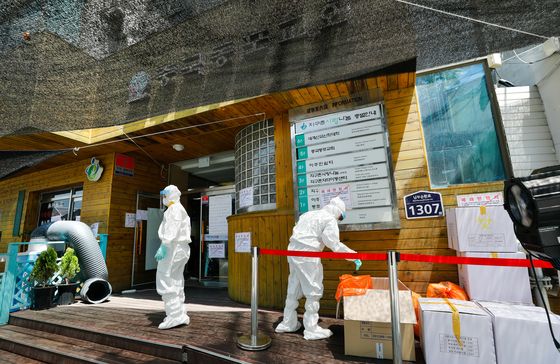 The entrance to a six-story building that houses the Korean-Chinese Church in Garibong-dong of Guro District, western Seoul, on Tuesday, where at least nine Covid-19 cases have been traced. A makeshift Covid-19 testing center has been set up near the entrance. [NEWS1]

At least nine Covid-19 cases have been traced to a Protestant church attended by Chinese immigrants in western Seoul, the latest in a string of clusters popping up in the Seoul metropolitan area.

All nine patients live in the church’s nursing home in Garibong-dong, which, along with the neighboring Daerim-dong neighborhood, are known as the Korean capital’s Chinatown, due to their Chinese population, shops and eateries.

Local media outlets have reported that all nine people in the latest cluster hold Chinese nationality, but the Guro District Office did not respond to multiple calls on Tuesday for confirmation. The vast majority are aged 60 or above, and they’ve all been hospitalized for treatment, health officials said.

The hot spot appears to have originated from another cluster that popped up last week at the Richway health care company in Gwanak District, southern Seoul.

Richway is known to have run marketing seminars for the elderly, offering health tips, introducing them to products and providing entertainment such as recreational activities. Some customers were diagnosed with Covid-19 after attending such events, including a 64-year-old man from the nursing home of the Garibong-dong church, who became the first person to be diagnosed with Covid-19 in the cluster last Sunday.

After he was diagnosed, epidemiologists ran tests on all 33 of his roommates and three church workers. During that process, eight more cases were discovered Monday, all of whom were the 64-year-old’s roommates.

Those who reside on church premises but tested negative for the coronavirus have nonetheless been told to self-quarantine for two weeks, the incubation period of the virus. The church, called the Korean-Chinese Church in English, shut down Sunday.

The Guro District Office said it was in the process of contacting some 150 worshippers at the church to be tested for Covid-19.

The district office said in a statement that members of nearby churches and their nursing home residents were also being called for tests to make sure the coronavirus hasn’t spread to other houses of worship.

No links between other churches have been discovered yet.

Based on epidemiological studies conducted so far, Guro District officials said there seems to be “a low chance” that the Korean-Chinese Church members spread the disease in their local community. Nursing home residents barely left the shelter and prayed in a room different from other worshippers at the church, the office noted.

The Korea Centers for Disease Control and Prevention (KCDC) announced Tuesday morning that 38 new Covid-19 cases were detected across the nation Monday, the same as the day before. Three were imported cases, and all but two of the rest came from the Seoul metropolitan area: 18 in Seoul, 12 in the surrounding province of Gyeonggi, three in Incheon and one each in South Chungcheong and South Gyeongsang.

Korea’s total case load now stands at 11,852. By Monday midnight, 274 people had died, up by one from the previous day, while 10,589 people had been declared fully recovered, up by 26 from the day before.

Almost all clusters in the Seoul metropolitan area that emerged over the past few weeks grew. 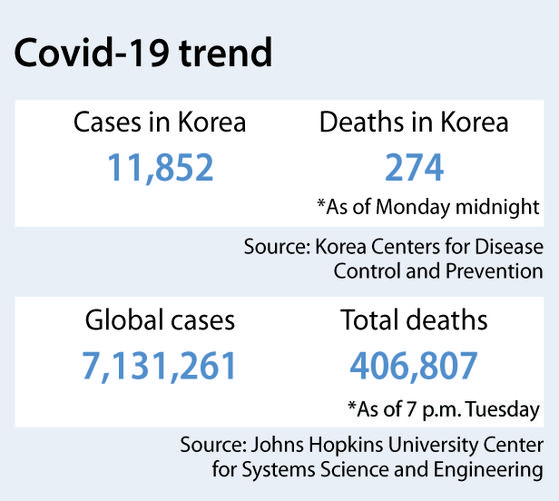 The one linked to nightclubs and bars in Itaewon-dong, central Seoul, the Korean capital’s largest international neighborhood, grew by three cases Monday to reach 277. All three cases were people who had contact with someone who went to a club or bar in Itaewon last month.

Another hot spot at the Korean e-commerce company Coupang’s distribution center in Bucheon, Gyeonggi, added a case to reach 139. The cluster from a string of small churches in the Seoul metropolitan area, mostly in Incheon, also grew by one case to reach 88.

The number of cases traced to Richway, including the nine cases from the Korean-Chinese Church, rose to 68, up from 52 by Sunday.

The Big Tree Church sub-cluster spread to another hot spot Monday, when at least six people at a nursing home for the elderly in Gwangmyeong, Gyeonggi, east of Seoul, tested positive that day, apparently infected by another resident who went to the church and was diagnosed with Covid-19 on Sunday.

Health officials said the initial spreader of the virus at the Gwangmyeong nursing home attended a May 31 service at the Big Tree Church, where he appears to have contracted the disease.

In a meeting with several ministers Tuesday to address the recent clusters, Prime Minister Chung Sye-kyun relayed a solemn warning for groups and businesses flouting the government’s health guidelines of self-distancing, sanitation and the requirement to wear face masks, stressing they will face severe consequences if they cause a new cluster.

Penalties many include the groups and businesses covering disinfection costs and all medical expenses incurred from patients linked to them, as well as an operations ban.

In Incheon, schools in Michuhol District were on high alert Tuesday after the city office revealed that a 9-year-old elementary school student and a 13-year-old middle school student, both females, tested positive for the coronavirus that day after coming into contact with their grandmother, who tested positive Monday. How the grandmother contracted the virus has yet to be revealed. They met on May 30 when the grandmother visited the granddaughters' house.

Both girls went to school on Monday. Health officials set up a makeshift Covid-19 testing center on each of the schools’ premises Tuesday to test some 700 students and faculty members.