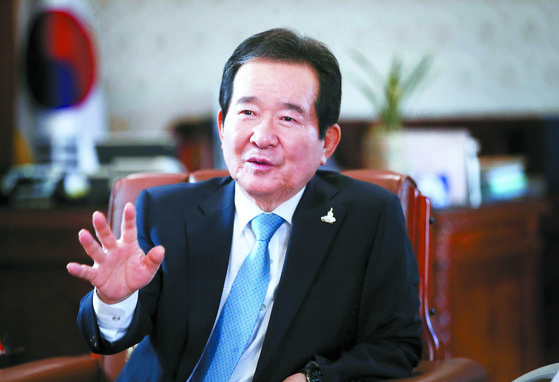 Chung Sye-kyun, prime minister of Korea, is interviewed by the JoongAng Ilbo on May 29. [OH JONG-TAEK]


For Prime Minister Chung Sye-kyun, dreams are not meant to be mere distant ideals.

They are meant to be realized.

Chung has dreamed of becoming a politician since he was a boy. Starting at an early age, he worked tirelessly to achieve his goals, whether that meant winning one of the most challenging electoral districts twice in a row or rising to a top position at a major Korean company.

His current dream? Rejuvenating a Korean economy plagued by the coronavirus pandemic while paving the way for a new generation to enjoy greater prosperity than the last one.

He envisions a multifaceted solution, including basic income for young adults, who, according to Chung, are “hurting the most.”

Chung is well-known for his expertise in economic and financial affairs, and previously worked as an executive at the SsangYong Group, a Korean conglomerate, before devoting himself to a career in politics.

Some considered Moon's nomination of Chung in December to be a sign that the administration would focus on the economy in the coming years.

In the following interview with the JoongAng Ilbo, Chung reflects on his early dreams and his vision for the future, describing his path to becoming a six-term lawmaker and making his case for economic policies needed to revitalize the economy.

Chung has since January served as both the prime minister and a Democratic Party (DP) lawmaker representing Jongno District, central Seoul, after he was tapped by President Moon Jae-in for the ministerial position. His most recent four-year term as lawmaker ended May 29, the day this interview was conducted.

Q. How do feel now that, starting tomorrow, you are no longer a lawmaker?
A. Simply put, I feel regret. I have worked 8,766 days as lawmaker, without taking a day’s rest. The fact that this is my final day makes me feel sorry.

What in particular do you feel regret over?
I dreamed of becoming a lawmaker ever since I was a boy, and I achieved it. As a six-term lawmaker, I never even took a breather between terms, and there never has been anyone like me [in Korea]. But although I worked hard and long, I don’t feel that I have done everything that I set out to do. I started politics to change the world a bit, and I really did try to make that happen, but I am not sure how successful I have been in that regard. That’s why I feel regret.

What are your most significant memories as a lawmaker?
For me, one of my most moving memories was when I was elected lawmaker as a 40-year-old by direct vote. Another moving moment was when I [changed districts and] won the Jongno District election in 2012.

Why did you change districts to Jongno?
It was to challenge myself. I did a good job in the [district in which I had won four elections], but I wanted to push myself and do politics at a higher level. At that point, I felt that as a man I must not be complacent with having been a four-time lawmaker, and Jongno was at that time one of the most challenging districts to run as lawmaker. I gave myself an ultimatum: Win Jongno and continue in politics, or lose Jongno and quit politics. Nobody forced this on me. It was my own choice. And it was a successful choice, one that was really worthwhile.

I wouldn’t classify myself as pro-Roh in the traditional sense of being in his core group of supporters, but I am pro-Roh in the wider sense. Originally, former President Kim Dae-jung picked me up [for politics]. But it was Roh who nurtured me. When I was working as the Minister of Commerce, Industry and Energy in 2006 under Roh’s administration, he called me over, telling me that the National Assembly was in no condition to run state affairs and that I should work for the party instead. The National Assembly at that time was filled with problems. Although I told them I wanted to stay and work for the government [as a minister], he kept pushing me in the direction of the party.

In 2007, I found myself as the chairman of the Uri Party [the ruling liberal party at that time] in the final year of Roh’s presidency. Roh always gave me his full support. I was a supporter of the pro-Roh movement, and that was where my loyalties lay. Even after the incident occurred with Roh [he committed suicide after finishing his term as president] I always supported the movement.

Have your dreams changed over time?
I have become a successful politician. But I started in politics not to reach a certain level of office, but because I dreamed of a world where everyone is living well together. This is still a distant dream, however. For the past 50 years, the sons and daughters have always become richer than their fathers and mothers. The question is whether this trend will continue with the next generation. I am a bit anxious. I want to make this a nation where each new generation is richer than the previous generation, but this dream is still a work in progress. Whoever says that I, Chung Sye-kyun, [is in politics] because I covet a certain political office, has a very shallow understanding of who I am.

Do you have any plans to run in the next presidential election in 2022?
I haven’t considered it at all. The country is at war with the coronavirus, so I am not thinking about anything else apart from that.

How long do you think the coronavirus outbreak will continue?
The coronavirus is a mysterious thing. I can’t quite give a promise as to when the situation will improve. Experts say that there will be a second wave of infections this autumn or winter. In the case of the 1918 Spanish Flu pandemic, there were three waves of infections. I don’t want to believe this, but the government has to be prepared for autumn and winter. If there is no second wave after that, then that is fine, and we could just consider it a practice run. But if we are not prepared and the second wave actually hits, then we will be in a dire situation.

What kind of preparations are you making now?
Our first priority is increasing the number of hospital rooms. We are also preparing more treatment kits, masks, protective wear and goggles. We have also prepared more flu vaccines for this year. This is because the flu can interfere with coronavirus testing results, and we must prevent confusion between patients with the coronavirus and those with the flu.

What should citizens do?
Until a vaccine is developed, the coronavirus will not be completely eradicated. Until that point, we have to coexist with the virus. As a result, citizens can’t afford to be surprised whenever the number of confirmed cases rise and be delighted whenever they fall. They have to trust the epidemiologists and be sure to thoroughly follow the routine preventative measures while carrying on with their daily lives.

Expansionary fiscal policy is the Moon government’s current approach. But it is being criticized by people who believe that it is releasing too much money into the economy.
We have to put out the immediate fire first. We have to give people the room to breathe, and we can do this by releasing money into the economy. Businesses must be kept alive so that they can offer employment and pay taxes.

People are worried about what these government measures may do to the economy.
I can understand why people may be worried. I am not underplaying the importance of financial stability, but as I have said before, we have to put out the immediate fire. But, of course, at the same time, the government should use its ammunition sparingly. More than anything, we have to make sure that the right man is in the right place at the right time— that is, making sure to increase the efficiency of the policies.

What are your specific plans?
We have to adjust how the government spends its money. At the same time, we have to expand its sources of taxation. But before we start increasing taxes, we need to make sure to earn the people’s sympathy on the matter. There are many ways to carry out expansionary fiscal policy. So we have to be sure to do that first and try to earn the citizens’ approval afterwards. But if instead of doing that, we start by fretting about whether we should increase or decrease taxes, that’s low-brow, the lowest you can go.

Recently, some people are suggesting policies such as national basic income and employment insurance as a social safety net. What do you think about those ideas?
It will be good if we can do all of it, but [the government] does not have enough money. I would advise the government to expand unemployment insurance gradually. On the other hand, instituting a national basic income requires the consent of Korean citizens, and with the current financial circumstances of the government, I don’t see this happening. Instituting a basic income implies enough money for its beneficiaries to afford a certain reasonable lifestyle, but the government just does not have enough money to make that happen. The people who are currently hurting the most are the young adults. At the very least, we have to consider the idea of providing some kind of basic income to this part of the population.

Any requests you want to make to the general population for the coronavirus era?
Please be sure to follow daily preventative measures. It is unlikely that the coronavirus situation will be resolved immediately. [New policies regarding the virus] are decided by relevant authorities after much deliberation. As a token of trust, please work together with the government to fight the virus.