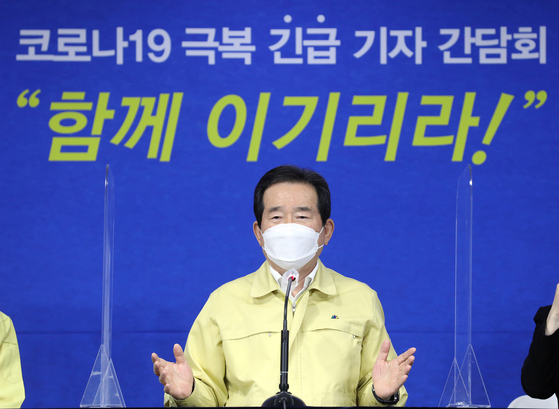 The government announced Sunday afternoon that it will maintain the current Level 2 social distancing measures in the greater Seoul area, while expanding bans on some facilities, and implement Level 1.5 nationwide starting Tuesday in an attempt to curb Covid-19 transmissions.

Prime Minister Chung Sye-kyun in an emergency press conference flanked by top health and quarantine officials said that the greater Seoul area encompassing Seoul, Incheon and Gyeonggi will remain at Level 2 in the five-tier system, but additional bans will be implemented on facilities where Covid-19 could easily be spread starting Tuesday for one week.

This includes bans on saunas and indoor group exercise classes, including aerobic and vigorous dance classes, and hagwon (private academy) lessons where the risk of infection is higher, including singing and wind instrument classes. Exceptions will be made for college exam prep classes under the condition that they strictly abide by quarantine guidelines. Likewise, cafes, health centers, saunas and study rooms operated in apartment complexes will also have to halt operations.

Year-end parties and gatherings at hotels and guesthouses will also be banned.

Those who do not abide by the measures will be fined.

The government will also implement Level 1.5 social distancing measures outside of the Seoul metropolitan areas for two weeks starting Tuesday amid concerns of a third wave of infections spreading nationwide.

Cities or provinces with high numbers of Covid-19 cases will be recommended to review Level 2 or stricter social distancing measures, to be determined by the respective local governments. This includes Busan, South Chungcheong, North Jeolla, South Gyeongsang and parts of Gangwon that have seen a recent spike in cases.

Chung noted that the situation is the most serious since the initial coronavirus wave in March, but also assured that the government is putting “all efforts and resources into protecting the public.”

Earlier Sunday, Chung convened a meeting of the Central Disaster and Safety Countermeasure Headquarters to discuss stricter measures to contain Covid-19 both in the greater Seoul area and to consider raising social distancing measures to Level 1.5 or higher nationwide.

The government had also been reviewing raising the measures to Level 2.5, the second-highest level, in the capital area recommended when nationwide community transmission intensifies.

The average cases in the past week was 416, enough to warrant raising social distancing measures a notch to Level 2.5, which requires 400 to 500 cases in a week or a doubling of daily patients.

However, Chung said the headquarters decided to maintain Level 2 for the time being, taking into consideration various factors, including the capacity of hospitals to take in patients and economic fallout.

He said, “Rather than taking a uniform approach, we are working to minimize damage to the daily lives of people through precise quarantine measures.”

The government implemented Level 1.5 social distancing measures in the greater Seoul area on Nov. 19, raising the level a notch to Level 2 last Tuesday. Some cities and provinces outside of the metropolitan area have already been implementing Level 1.5, depending on the Covid-19 situation spikes in their regions.

Korea runs a five-tier social distancing recommendation system — Levels 1, 1.5, 2, 2.5 and 3 — with each level having different guidelines and rules. The country is divided into seven zones, and different levels are recommended per zone depending on the Covid-19 figures.

Under Level 1.5 measures to be implemented in areas outside of greater Seoul, festivals, concerts and events of over 100 people will be prohibited and the viewing of sports games and religious gatherings limited to 30 percent capacity. In-person classes at schools will be kept at two-third capacity.

The government’s latest announcement keeps Level 2 measures in the Seoul metropolitan area with some stricter measures adopted from Level 2.5 without formally taking the level up a notch.

Under Level 2, events involving over 100 people are prohibited, while nightclubs and bars that allow dancing are forced to close. Restaurants cannot receive customers after 9 p.m. but can offer takeout. Cafes are only allowed to serve takeout at all hours. Elementary and middle school class sizes are restricted to one-third capacity.

Level 2.5 measures include a ban on gatherings with 50 or more people. It also suspends operation of all indoor fitness facilities and singing classes, and major public facilities cannot operate past 9 p.m. Regions with lower risk could choose to implement measures as deemed appropriate by the local government based on their circumstances.

Daily transmissions fell below 500 for the first time in four days Sunday, though it is too early to call it a marked drop in cases as there are fewer people tested on weekends. 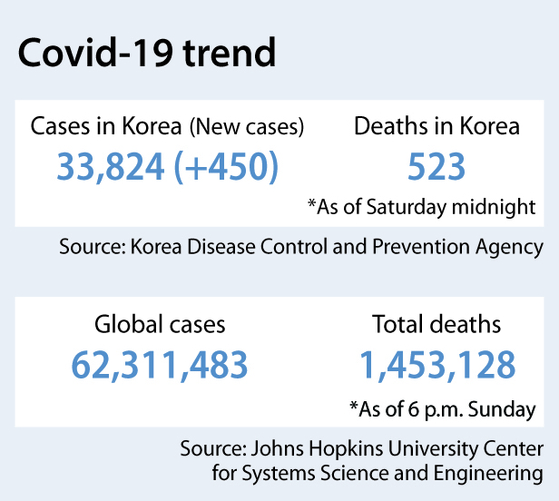 There was one additional death, bringing total fatalities to 523, and the fatality rate is 1.55 percent.

Of domestic cases, 154 new infections were reported in Seoul, 88 cases in Gyeonggi and 21 in Incheon as of Saturday midnight, according to the KDCA. There was a continued spread outside of the greater Seoul area, including 21 in Busan, 20 in South Jeolla and 19 each in Gangwon and North Chungcheong.

There were 37 imported cases, including 12 from the United States, three from Switzerland, three from the Philippines, two from China and one from Japan.

The heightened measures come as health authorities are trying to contain the spread of the virus ahead of the College Scholastic Ability Test (CSAT) on Thursday, when some 490,000 high school seniors will take the college-determining entrance exam.

This marked the first weekend since the government implemented Level 2 measures, with religious gatherings limited to 20 percent capacity in the greater Seoul area, and eating meals together banned.

Health authorizes have pointed to clusters breaking out in daily life including in small gatherings, schools, hagwon, saunas, fitness centers, religious facilities and even while making kimchi.

A church in Mapo District, western Seoul, has 103 related infections as of Sunday — 11 more than the previous day.

A construction company in Seocho District, southern Seoul, has produced 13 cases after the first patient was confirmed on Thursday, of which nine were colleagues of the first patient and three were family members.

So far, 11 cases have been linked to a table tennis hall in Dongdaemun District, central Seoul, after the first patient was confirmed on Thursday, including eight people who used the facility and a family member and two colleagues.

A dance class in Gangseo District, western Seoul, produced 21 more patients as of Sunday, according to the KDCA, bringing total cases in the cluster to 176.

In Jecheon, North Chungcheong, 12 more people were confirmed Covid-19 positive after two people in their 60s were found to be infected after a kimchi-making gathering on Nov. 25. A total of 52 people have tested positive so far after 955 contacts were tested.

A music class in Busan added 25 new cases as of Sunday and is now linked to 103 coronavirus infections, of which 27 were attendees of the class and 76 were contacts. Local health authorities confirmed 3,925 contacts, of which 3,731 people have been tested.

Health authorities have urged people in the greater Seoul area to refrain from year-end gatherings and meetings of more than 10 people, including with colleagues, alumnus and acquaintances.

The ruling Democratic Party (DP) is proposing raising the Covid-19 vaccine supply target to 44 million people, or 85 percent of the country's population, according to party sources Sunday.

The DP said it is reviewing seeking another 1.3 trillion won ($1.2 billion) in the budget for next year, which is currently being deliberated in the National Assembly, in order to secure vaccine supplies.

The government earlier said it plans to target vaccine supplies for 30 million people, or 60 percent of the total population.

Chung during the Sunday press conference said that the government is working to procure vaccine supplies for at least 30 million people, adding, “We believe it is desirable to acquire more than this supply and will work toward this.”

Some 3.6 trillion won has been proposed by the main opposition party for a third round of emergency relief funds, which could bring the total budget for Covid-19 relief, including the vaccine supply fund, to some 5 trillion won.