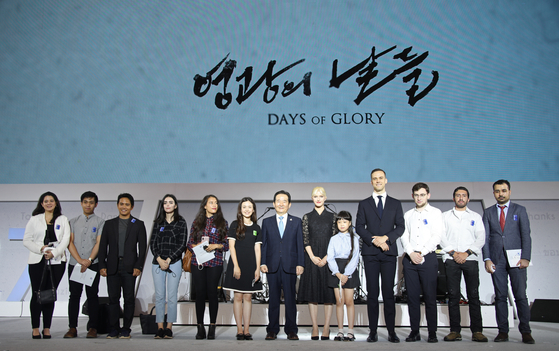 
South Korean Prime Minister Chung Sye-kyun on Monday vowed the government would uphold security and peace on the Korean Peninsula in line with the sacrifices made by veterans of the 1950-53 Korean War, during a ceremony marking the United Nations Forces Participation Day.

In a speech delivered at the Dongdaemun Design Plaza, Chung spoke at length about the contributions made by service members of 22 UN Sending States who came to fight for a country few of them had previously visited.

“Beginning with the ‘Battle of Osan,’ the first engagement between U.S. and North Korean troops, around 1.95 million service members fought on behalf of the Republic of Korea for three years,” Chung said, referring to South Korea by its official name.

“Around 37,000 lost their lives, while those injured also number over 103,000,” but “the sacrifices and contributions of the UN veterans became the foundation of the freedom, peace and prosperity of today’s Republic of Korea.”

━
The ceremony's theme was “Days of Glory,” meant as a “tribute to the days when all Korean War veterans fought shoulder-to-shoulder to safeguard the freedom and peace” in South Korea, according to a press release from the Ministry of Patriots and Veterans Affairs (MPVA).

Stressing there were “no borders” in honoring the service of veterans just as there were no borders in working for peace, Chung noted Monday’s ceremony was just one of many events the South Korean government was hosting this year to commemorate the 70th anniversary of the outbreak of the war.

July 27 marks the day in 1953 that UN Forces signed an armistice with North Korea to end hostilities, bringing to a close the bloodiest conflict in Korea’s history.

In 2013, the South Korean government designated the date as UN Forces Participation Day to remember the sacrifice of foreign UN veterans. The MPVA stressed this year’s event was of “greater importance” given the commemoration was formally ratified by the National Assembly as part of the UN Korean War Veterans’ Dignity and Honor Act.

While Seoul hoped to fly in hundreds of surviving veterans to mark the occasion this year, the Covid-19 pandemic forced the government to scale down the ceremony significantly. Around 200 people were in attendance on Monday, including descendants of Korean War veterans currently studying in South Korea under government scholarships.

Chung, however, noted that in spite of the sacrifices made by UN troops 70 years ago, the “door to peace” on the Korean Peninsula remained shut.

“The settlement of peace on the peninsula is the greatest form of gratitude we can show to the sacrifices and contribution of UN Forces veterans,” Chung said. “We ask veterans and their families to continue showing support so that such a day can arrive.”