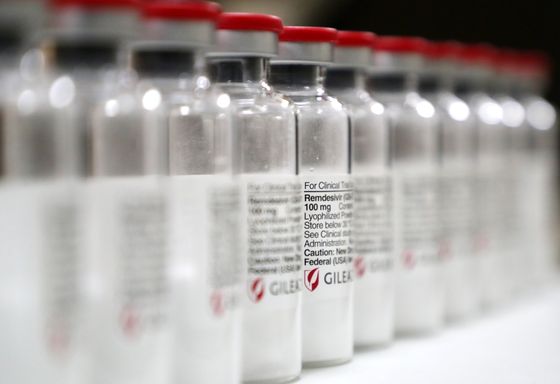 Korea's early success with Covid-19 test kits put it in the global spotlight in April as countries queued up to put orders in at the height of the pandemic. Over the following months Korea’s bio industry has been rushing to develop treatments and vaccines for the virus.

A handful of pharmaceutical companies of all sizes have announced that they are developing coronavirus treatments over the past few months, making headlines and boosting stock prices along the way. The government has also rolled out ambitious support plans like regulatory shortcuts or financial aid for research.

Despite the hype, Korean companies are still in the very early stages of developing treatments, and experts are trying to lower expectations for a quick solution — the development of a Covid-19 treatment or vaccine is not a sprint, but a marathon with many companies likely to fall along the way.

According to the Korea National Enterprise of Clinical Trials, seven clinical trials to commercialize Covid-19 treatments or vaccines have been approved by the Ministry of Food and Drug Safety as of Thursday.

Among them, four are conducted by Korean pharmaceutical companies — Bukwang Pharmaceutical, Enzychem Lifesciences, Shin Poong Pharmaceutical and Genexine — all of which were allowed to conduct up to Phase 2 trials. Two are tests for U.S. Gilead Sciences’ remdesivir and one is the vaccine candidate INO-4800 developed by U.S. firm Inovio.

In terms of progress to commercialization, Gilead Sciences is ahead of the pack. It received approval for two Phase 3 clinical trials on human participants in early March.

“At the moment, receiving government approval for clinical trials can be seen as a meaningful standard for judging a candidate’s potential," said an anonymous source in the pharmaceutical industry. "From the government’s perspective, drugs are related to a life and death matter, so the nod to start clinical trials is its first approval for safety.”

Bukwang, Enzychem and Shin Poong’s treatment candidates were able to skip Phase 1 trials and jump straight to Phase 2 because they were existing drugs sold on the market, originally made, tested and approved to cure diseases other than the ongoing pandemic. In other words, their safety is ensured to a certain degree, but their efficacy in specifically curing Covid-19 will have to be put to the test.

Developing an entirely new drug to fight or prevent Covid-19 is an especially difficult task as it is a novel disease.

On June 3, the government announced an ambitious plan to invest more than 100 billion won ($84 million) this year in clinical trials of Covid-19 treatments and vaccines. The goal is to succeed in the development of a treatment this year and a vaccine by 2021.

Green Cross and Celltrion are the two companies currently working with a government task force to develop a new Covid-19 treatment. Both are scheduled to embark on clinical trials in this year’s second half, or possibly as early as July. For vaccines, SK Bioscience, GeneOne Life Science and Genexine are part of the government project.

According to experts, however, the Korean government’s timeline may be a difficult one to match.

“Developing vaccines typically takes at least 10 years. Korean companies have been pledging to accelerate research but doing so for vaccine development comes with high risks — it means they would have to conduct clinical trials on patients about a substance they don’t entirely know about,” said Hwang Jurie, an international affairs and public relations director at Korea Bio, an association for the country’s bio companies.

Developing treatment and vaccines is a task on an entirely different level compared to testing kits, experts say. From prior experience, Korean companies already had technology and mass production capacity for testing kits which relatively takes less time and money to develop. Pharmaceuticals, however, require years of testing, massive amounts of money and a huge amount of uncertainty.

“The United States is at the forefront of developing Covid-19 vaccines at the moment. This is the result of years of government investment in research and development in both vaccines and bioterrorism which started in the early 2000s, after the Sept. 11 attack,” said Kim Woo-joo, a professor in infectious disease at Korea University Hospital.

“Korea, on the other hand, didn’t push long-term initiatives for fundamental vaccine research and development. The current government is putting in a lot of effort but it’s important that the measures introduced now keep going in the long term.”