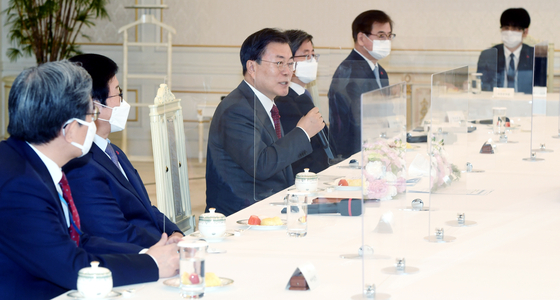 President Moon Jae-in speaks on vaccine procurement worries in a meeting with the five highest national leaders under the Constitution in the Blue House in central Seoul Tuesday. [JOINT PRESS CORPS]


The Korean government is catching flak for lagging behind other countries’ efforts to secure Covid-19 vaccines, with some officials and experts blaming delays on the absence of a command center for the procurement.

The vaccine task force held its first meeting on June 29 and has so far convened 17 official meetings. However, the task force lacks a Blue House representative and is comprised of working-level officials from agencies such as the Korea Disease Control and Prevention Agency (KDCA), the Ministry of Health and Welfare and the Ministry of Science and ICT.

“The Ministry of Strategy and Finance expressed objections to allocating a budget for vaccines after the emergency relief fund,” said the official who took part in the task force. “Thus, the Health Ministry had to scrape together 100 billion won [$90.3 million] from its budget, but the KDCA and Health Ministry were busily trying to pass responsibility on to each other.”

Public officials of the task force especially feared that, should anything go wrong with the vaccine procurement process, they would immediately become scapegoats.

Discussions of procuring specific coronavirus vaccines only came up during the ninth meeting on Sept. 2, focusing on acquiring doses from Britain’s AstraZeneca. The rest of the talks were generally focused on the Covax Facility, the World Health Organization’s global mechanism for fair allocation of vaccines, a move likely to avoid any risk-taking.

President Moon Jae-in shortly after his election in 2017 said that the command center for disaster response and public safety measures is the Blue House.

Public officials were not given authority to make such bold investments to procure vaccines in the first place. In countries like Japan and the United States, leaders stepped up to secure vaccines.

The government has not revealed the members of the task force and the discussions have likewise taken place behind closed doors.

“The task force has no experience purchasing vaccines and was comprised of disease control officials unrelated to vaccines,” the government official said, adding that there was additional confusion when members were switched out as “agencies attempted to avoid responsibility.”

The official added, “such non-experts scrambled belatedly” to make contact with pharmaceutical companies like Pfizer, but "they were told that supplies can be procured if orders are made just two months ahead of time, and reported like so to their superiors.”

The Korean government said on Dec. 8 that it is procuring vaccines for 44 million people, enough to cover 88 percent of the population.

Prime Minister Chung Sye-kyun said Sunday in an interview with KBS that Korea will be able to start limited vaccinations in the first quarter of next year, adding that “inoculation will begin as early as in February or March at the latest.”

However, AstraZeneca is the only company Korea has signed a contract with so far. The government is looking to ink deals with Pfizer, Moderna and Johnson & Johnson's Janssen soon.

Chung admitted that vaccines developed by Pfizer, Moderna and Janssen are unlikely to be supplied during the first quarter of 2021.

The AstraZeneca vaccine is expected to be approved for use by the European Medicines Agency within the year but may take longer to get approval from the U.S. Food and Drug Administration.

“When the government referred to its verbal pledges when asking for vaccines from Pfizer and Moderna, they were told by the pharmaceutical companies that there is not enough immediate supply for Korea,” the government official said.

President Moon met on Tuesday with the five highest national leaders under the Constitution at the Blue House, where he addressed worries about vaccine procurement.

“I believe the inoculation of the public will begin not too late, and preparations are well underway,” he said. “I know that there is much worry over vaccines these days, but it may be inevitable that countries producing vaccines may get them first because they extended much support for vaccine development.”

A Blue House official said that when Moon was briefed on the vaccine situation around November, he told aides to do whatever they can to procure vaccines. But one aide reportedly said that the pharmaceutical companies were demanding too much money, and that Moon in turn told them to “procure vaccines without consideration of budget constraints.”

It is unclear if such a message was conveyed to related agencies, however. Korea had especially been touting its ability to contain the Covid-19 pandemic through its effective quarantine measures.

“The failure in vaccine procurement has damaged the credibility of the K-quarantine measures built up in the past year,” a Blue House official said.

South Korea ranks 34th out of 37 OECD countries in Covid-19 vaccine reservations per capita, according to data published by Bloomberg. Canada leads the list, having covered its population by more than fivefold, followed by Britain, New Zealand and Australia.

The data show that South Korea has reserved vaccines to cover 70.8 percent of its population.

More than 2.1 million people in six countries — the United States, Britain, Canada, China, Russia and Israel — have been given Covid-19 vaccines as of Monday, according to data collected by Bloomberg.