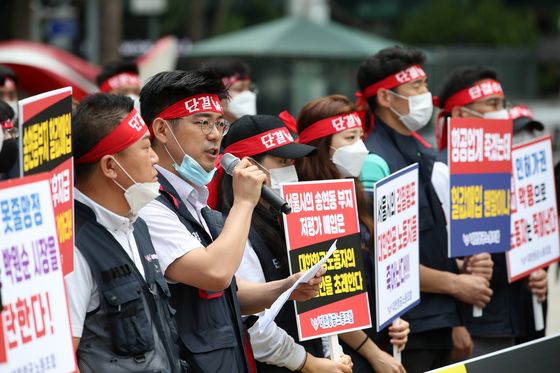 No one bid for a centrally located plot of land in Seoul that cash-strapped Korean Air Lines is trying to unload.

The sale of the 36,642-square-meter (394,411-square-foot) plot on Songhyun-dong in Jongno District, central Seoul, fully owned by the airline, was expected to help the country’s No. 1 airline get through a liquidity crisis. The land, located east of Gyeongbok Palace, is estimated to be worth around 600 billion won ($501.5 million). It is currently empty and doesn’t serve any purpose.

The company has 4 trillion won in debt that needs to be paid back this year.

A Seoul city proposal last month to use the plot as a park — even after it’s sold to a third party — is seen as the main reason for no bids.

A decision by the city is supposed to be made in August by a committee that supervises city construction, according to Ha Dae-geun, a spokesperson for the city of Seoul.

“There is no reason for a private company to spend several hundred billion won to make a park,” said Hong Seok-yun, a spokesperson for Korean Air Lines. “Considering the public interest [in the park], only Seoul city can make use of the land.”

Other possibilities include not selling the land or signing a deal with the city.

Selling the land to Seoul could be less helpful to the airline as the city government has proposed paying for the land over the next two years from 2021 through 2022.

That “lacks the effectiveness” of solving the airline's liquidity crunch, according to Hong.

Korean Air Lines’ labor union on Thursday blamed Seoul and Mayor Park Won-soon for “not caring about the survival of airline industry workers at all.”

Members of the union gathered in front of Seoul City Hall Thursday morning and said Seoul city’s purchase of plot for an undervalued price would endanger the livelihoods of Korean Air Lines employees.

Seoul has offered 467.1 billion won for the plot.

“Korean Air Lines employees, 70 percent of whom are on forced leaves, are struggling for their existence with the risks of Covid-19,” said Choi Dae-yeong, a chairperson of the airline's union. “Selling the land in Songhyun-dong is an attempt to overcome the crisis. It’s not an attempt to make money but a struggle to stabilize employment.”

Ha from Seoul city said, “The city government hasn’t confirmed it will turn the land into a park, but merely made a proposal. We haven't delivered our stance to Korean Air Lines. Currently, we’re canvassing public opinion. The estimated price of the land could go higher than what we had proposed.”

On the same day, Korean Air Lines flew its first passenger aircraft filled with cargo, an effort to make full use of its assets. Many planes have been idled during the coronavirus pandemic.

Cargo seat bags are designed to maximize available space for cargo on a passenger carrier. They are placed in passenger seats.