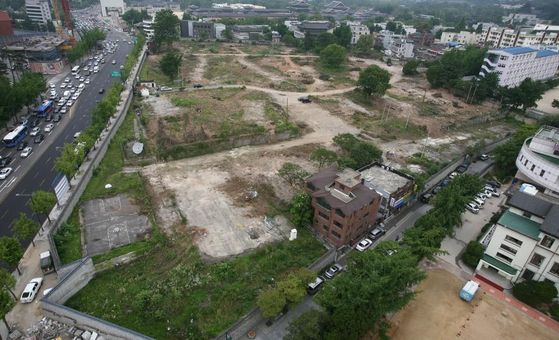 The Korean Air Lines plot in Songhyun-dong, Jongno District in central Seoul. The preliminary bid for the land closed on Wednesday without a single offer. The airline blames Seoul City’s proposal last month to use the plot as a park. [YONHAP]

Korean Air Lines is filing a civil complaint against the city of Seoul for interfering with its plan to sell a plot of land it desperately needs to unload to stay solvent.


The airline said in a statement Friday it is filing a complaint with the Anti-Corruption & Civil Rights Commission (ACRC) against the Seoul Metropolitan Government, which last month proposed developing a property in Songhyun-dong in central Seoul owned by the airline into a park.

The plot, located east of Gyeongbok Palace, is estimated to be worth around 600 billion won ($501.5 million). Selling it is part of Korean Air Lines restructuring measures instituted as business has collapsed and the carrier is facing four trillion won of debt maturing this year.

Korean Air Lines blamed Seoul for no bids being lodged for the property this week.

“The plot in Songhyun-dong is a key self-help measure that is being supervised by Samjong KPMG and Samsung Securities,” the airline wrote in the statement. “A total of 15 companies expressed willingness to take part in the bid. But Seoul’s announcement on the intent to use the plot as a park turned those potential buyers to become reserved.”

The airline noted that the 467 billion won being offered by Seoul for the land “isn’t enough.” It adds that the terms of any deal with the local government could also be problematic, as the carrier might have to take payments spread out over a number of years.

It suggested Seoul could further delay the payment until the construction kicks off on the plot. Seoul also doesn't have the wherewithal to turn the plot into a park, according to Korean Air Lines.

“Quickly securing liquidity for Korean Air Lines could be seriously threatened,” the airline said about the effect of Seoul’s proposal.

“Seoul came up with the idea of creating a park on the land considering there are many cultural sites like museums around the area,” said Ha Dae-geun, a spokesperson for the city of Seoul.

Korean Air Lines in 2015 announced a plan to build a cultural center on the plot.