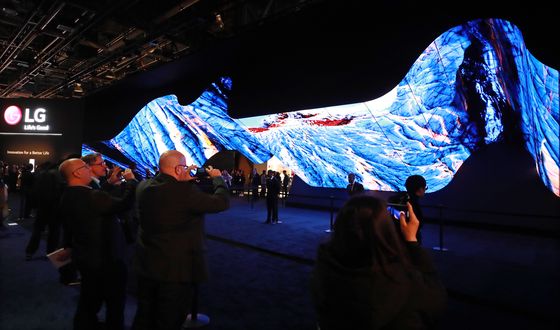 A large rollable OLED screen is displayed by LG Electronics at CES 2020 in Las Vegas. [YONHAP]


LG Display says it will develop a stretchable micro light-emitting diode (LED) display by 2024 as part of a state-run project led by the Ministry of Trade, Industry and Energy.

If realized, a stretchable display would be the peak of flexible display technology, following the bendable, rollable and foldable products already on the market today.

LG Display said Thursday that the planned display will have a proposed elongation rate of 20 percent and will be able to be manufactured in any size or shape, giving the example of a sheet of paper.

Elongation rate refers to how much an object can stretch from its original length without distorting screen quality.


“The Industry Ministry chose us to conduct the project for stretchable micro LED displays as part of its initiative to foster next-generation display development,” said a spokesperson from LG Display who refused to be named.

The new display, LG says, will be a significant step up from the currently available flexible and foldable screens, as they can only be folded in one specific direction.

The stretchable property could also increase the portability and flexibility of screens being used in cars and other appliances.

“When realized, there could be ‘multi-foldable smart devices’ that can be folded freely, as well as advanced, well-fitted wearables that won’t hamper users’ movements,” LG Display said in a statement.

Rival Samsung Display unveiled a prototype organic light-emitting diode (OLED) display that stretches back in 2017 at an event called Display Week in Los Angeles, although it has never actually produced a commercial product.