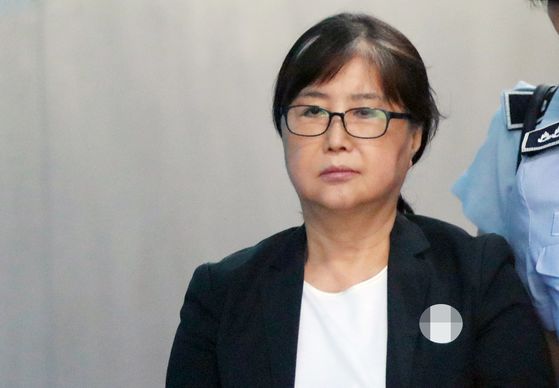 In this file photo, Choi Soon-sil enters the Seoul Central District Court on Aug. 24, 2018, to attend her trial. [YONHAP]

The Supreme Court upheld bribery convictions for Choi Soon-sil, controversial friend of ousted President Park Geun-hye and a central figure in the abuse of power scandal that doomed Park’s presidency, and sentenced her to 18 years in prison.

The court upheld a fine of 20 billion won ($16.8 million) and an order for Choi to surrender 6.3 billion won she earned from her crimes, which were centered around coercing conglomerates to pay bribes to her and the former president.

Choi, who changed her name in 2014 to Choi Seo-won, did not attend the court session, saying she was undergoing a medical treatment.

The top court’s decision ended Choi’s legal battle of three years and seven months. In October 2016, the prosecution started an investigation into Choi’s alleged abuse of power and coercion of conglomerates to pay bribes. She was taken into custody on Nov. 3, 2016, for questioning and indicted on Nov. 20 as a primary suspect in the corruption scandal that led to Park’s impeachment in 2016 and removal from office in 2017. Choi has remained behind bars throughout.

In 2016, Choi was indicted on 18 charges. Among them was receiving financial support from Samsung Group for equestrian training for her daughter Chung Yoo-ra in conspiracy with Park.

Choi was also prosecuted on charges of forcing 50 companies including Lotte and SK to make contributions of 77.4 billion won to two nonprofit foundations she controlled.

In February 2018, the Seoul Central District Court convicted Choi of most of the 18 charges and the court recognized a conspiracy with Park in many areas. It ordered Choi to serve a 20-year prison term and pay a fine of 18 billion won.

In the appeals trial by the Seoul High Court, all the convictions were upheld and the amount of the fine was increased to 20 billion won.

The Supreme Court dismissed some of her coercion convictions. It ruled that Choi was not guilty of coercing Samsung Group into supporting a training center for young athletes. As a result, her prison sentence was reduced to 18 years.

In a separate but related trial, the Supreme Court upheld the convictions of An Chong-bum, a former presidential senior secretary to Park, for helping Choi in her crimes. An was ordered to serve four years in prison, pay a 60 million won fine and surrender 19.9 million won in ill-gotten gains.

While in jail, Choi worked on a memoir and recently published it. In the book, "Who Am I," Choi proclaimed her innocence, calling herself “an invisible person” in terms of her relationship with Park. She wrote that she cannot understand accusations that she was the central figure of the abuse of power and corruption scandal that drove Park from office.

The outcome of Choi’s final appeal could be a preview of Park’s, as she was labeled a co-conspirator in 14 of Choi’s 18 charges, in addition to other charges. Following her ouster in 2017, Park was prosecuted for abuse of power and various corruption charges.

Park was convicted by the district and high courts, but the Supreme Court in August 2019 ordered a retrial of the corruption cases. The top court said the bribes she received during her presidential term must be punished separately from other crimes, indicating she could face heavier punishment than her current 25-year sentence.

In the retrial, the prosecution asked the Seoul High Court in May 2020 to punish Park with a 35-year jail sentence. The high court will announce its ruling and sentencing on July 10.

Park is unlikely to attend the sentencing, as she has been boycotting all trial processes since October 2017.