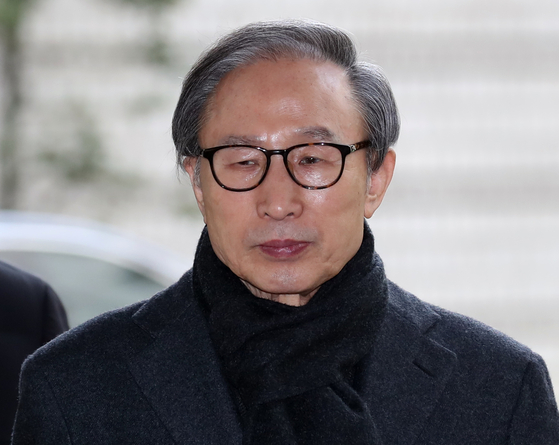 In this file photo, former President Lee Myung-bak enters the Seoul High Court on Feb. 19 to attend a sentencing hearing. On Thursday, the Supreme Court upheld the high court's rulings and sentence against Lee. [YONHAP]


The Supreme Court convicted former President Lee Myung-bak of embezzlement and taking bribes from a conglomerate and sentenced him to 17 years in prison.


Lee spent a year in prison during the trial process, so could serve 16 years — if he doesn't get a presidential pardon.

The court upheld the Seoul High Court’s rulings and sentence for Lee, ending a two-and-a-half year legal battle by the 78-year-old former president. Lee did not attend the hearing Thursday morning.

In February, the high court sentenced Lee to 12 years in prison and fined him 13 billion won ($11.6 million) for taking bribes and embezzling money during his presidency, which ran from 2008 to 2013. Another five-year prison term was handed down for crimes committed before his term.

The Supreme Court said Thursday that it found no grounds to overturn the high court ruling, although Lee pleaded innocence throughout his trial.

Lee’s lawyer, Kang Hoon, said the Supreme Court rushed to rule against Lee. “It spent just four months to review the evidential records, which are over 120,000 pages,” Kang said. “That means the court read 1,000 pages a day.”

Kang said not a single penny of the money the court convicted Lee of embezzling or accepting as graft ever reached the former president.

Lee was found guilty of embezzling 25.2 billion won from DAS, an auto parts company that prosecutors claimed was a conduit through which the former president amassed funds for his political and personal activities. DAS was legally registered in the name of his elder brother, Lee Sang-eun, but the court said the former president was its actual owner.

The Supreme Court also upheld graft convictions, including a charge that Lee had taken bribes from Samsung through DAS in return for issuing a presidential pardon to its chairman, Lee Kun-hee, who passed away this week. The former president was found guilty of receiving about 8.9 billion won from Samsung in 2009.

Following the Supreme Court’s ruling, the government will begin the process of jailing Lee, who has remained under house arrest since February.

According to the law governing the imprisonment process, Lee is supposed to be summoned by the prosecution first and then sent to the Seoul Dongbu Detention Center before starting his jail term.

Because the court ruling is effective immediately, the prosecution can start the process right away. But prosecutors are expected to give the former president some time to prepare.

Kang said Lee has a doctor’s appointment on Friday. The former president wants to appear at the prosecution on Monday, he said.

After an admission process at the detention center, Lee will be transported to a prison.

Since the former president has been in and out of the detention center and spent about one year behind bars, he has 16 years left to serve of his 17-year prison term.

Lee was first taken into custody in March 2018, but released on bail after nearly a year behind bars. When he lost the appeal on Feb. 19, 2020, he was immediately taken back into custody, as the high court revoked the bail order that had kept him under house arrest.

Lee’s lawyers challenged the cancellation of the bail, and the court released him six days later. Since Feb. 25, Lee remained under house arrest throughout the Supreme Court trial.

While the Supreme Court ruling will put Lee back in a jail cell, Lee could get a presidential pardon.

In 1997, former President Chun Doo Hwan was sentenced to life in prison and his successor Roh Tae-woo to 17 years for staging a military coup and creating slush funds. They were released in December of that year on presidential pardons.

Lee’s successor, former President Park Geun-hye, is not yet eligible for a special pardon as she is still standing trial.

In July, Park was convicted of corruption and abuse of power in a retrial by the Seoul High Court, and her 30-year prison sentence was slashed by 10 years.

The prosecution appealed to the Supreme Court and requested a tougher punishment.

The Supreme Court has yet to try the case. If the highest court decides to reject the prosecution’s appeal for a second retrial by the high court, Park’s conviction and sentencing will be finalized and she will become qualified for a presidential pardon, which can only be issued after a criminal case has been exhausted.

Park has remained in the Seoul Detention Center since she was taken into custody in March 2017. She has been defying the trial process, calling it political persecution.