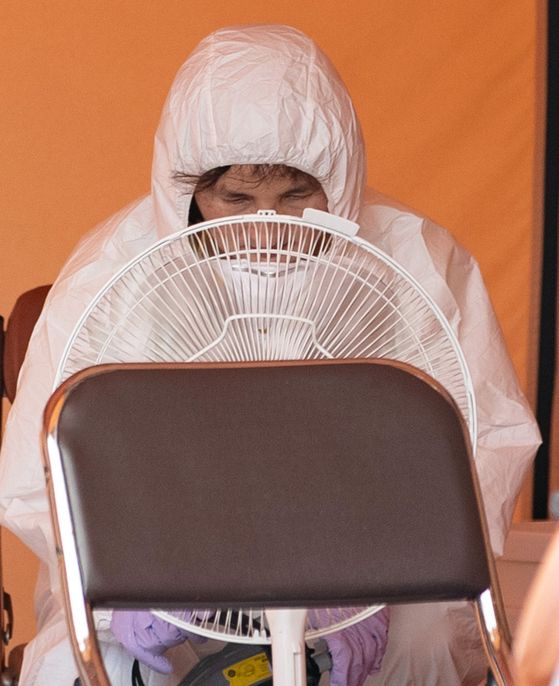 A health care worker cools off at Yangcheon Public Health Center in western Seoul on Thursday. Authorities said changes in guidelines for Covid-19 testing centers are under discussion as the scorching heat approaches. [NEWS1]

The cluster traced to the Richway health care company in Gwanak District, southern Seoul, is particularly worrying, officials noted, because nearly 70 percent of over 100 patients in that hot spot were in their 60s or above.

With those patients spreading the disease in their local communities and social groups, including nursing homes and houses of worship, officials stressed that old people were putting their own lives at risk by leaving their homes and mingling with friends in places with poor air circulation.

“We’re seeing many clusters of infections in the Seoul metropolitan area recently involving the old population,” Health Minister Park Neung-hoo said Thursday in a press briefing. “Old people tend to have weaker immune systems, which means the consequences of infection can be fatal.”

Jung Eun-kyeong, director of the Korea Centers for Disease Control and Prevention (KCDC), warned against older people gathering in packed rooms without windows Wednesday, saying if they do end up in such settings, they mustn’t eat or sing, and must wear a face mask and use hand sanitizer.

The KCDC announced Thursday morning that 45 new cases of Covid-19 infections were counted across the nation Wednesday, down from 50 on Tuesday. Five cases were imported and all of the rest were in the Seoul metropolitan area: 20 in Seoul, 15 in the surrounding province of Gyeonggi and five in Incheon.

Korea’s total case load now stands at 11,947. By Wednesday midnight, 276 people had died, the same as the previous day, while 10,654 people had been declared fully recovered, up by 43 from the day before. 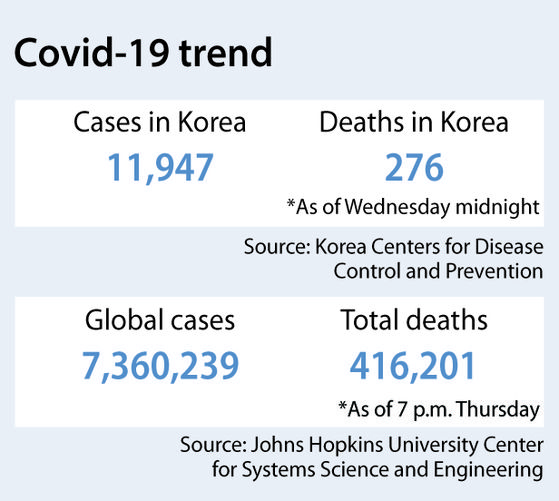 By Thursday noon, 116 patients were traced to the Richway cluster, 23 more than by Wednesday noon. The cluster from several table tennis centers in Yangcheon District, western Seoul, added six more cases to reach 60, while another cluster traced to a string of small Protestant churches in the Seoul metropolitan area, mainly in Incheon, added two more cases to hit 94.

Two more Covid-19 infections have been linked to the Korean e-commerce company Coupang’s distribution center in Bucheon, Gyeonggi, bringing the total number of cases in that cluster to 146.

In Gwangmyeong, Gyeonggi, Kia Motors was forced to shut down its factory Thursday when one of its workers tested positive for the coronavirus. The company told some 6,000 workers not to show up for work.

Gwangmyeong officials said 65 factory workers who had close contact with the patient were contacted for Covid-19 testing. Upon receiving the results, Kia Motors will decide whether to extend its factory shutdown.

Some 300 people who have been tested in regards to the cluster of nine cases at a church for Chinese immigrants in Garibong-dong, Guro District, western Seoul, have all turned out negative, Guro officials announced Wednesday. All nine cases were people who lived in the church’s nursing home. The first person in the group to have been diagnosed with the disease apparently spread the virus after getting infected himself in a marketing seminar by the Richway health care company, officials said.

In a surprising turn of events, health officials said Wednesday that the high school senior was not actually Covid-19-positive, hinting at the possibility she was misdiagnosed. Authorities, however, have yet to officially acknowledge any missteps in the testing procedure, saying the matter was under investigation.

Officials said the student visited a Covid-19 testing center near her home Saturday and received her positive results Sunday. She was immediately transferred to Seoul Medical Center in Jungnang District, but when she arrived for a second test, the results came out negative.

On Monday, she was tested by a different organization, which also turned out negative. After her third negative result on Tuesday, officials from the KCDC and Seoul Metropolitan Government decided to discharge her from the hospital but keep her quarantined at her home for 14 days, the incubation period of the virus.