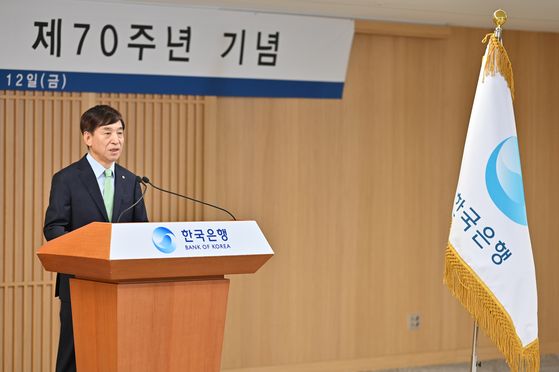 Bank of Korea Gov. Lee Ju-yeol speaks his commemorative speech to celebrate the bank's 70th anniversary on Friday at the bank's headquarters in Jung District in central Seoul.

The fundamental job of a central bank has been brought into question as a result of the pandemic, Lee Ju-yeol, Bank of Korea Gov. said in a commemorative speech Friday celebrating the bank’s 70th anniversary.

The bank’s role as a “crisis fighter” has gained more support than before in the process of countering the latest economic downturn, he noted.

"Discussions are being held about the extent of the central bank’s role,” Lee said in a speech released in online video Friday. “It is the central bank’s basic principle to be cautious when exercising the power of issuing money, but the latest crisis has led to the bank’s role as a crisis fighter to gain more ground than before.”

Lee added that a social consensus should be reached about the bank’s role in making fiscal policy and intervening in the market.

A monetary easing policy will continue for a while longer, Lee said, until a signs of economic recovery are seen in the country.

The central bank cut the base rate to a record low of 0.5 percent last month. It was a second rate cut since the novel coronavirus outbreak began.

Lee cautioned about inflation and asset bubbles in the long term, which have in the past led to financial imbalances. There should be follow-up measures to normalize the slew of policies that have been tried for the first time during the crisis once the economy settles down, Lee said.

A paradigm shift is expected in the country's industries when the coronavirus fades, and Lee said Korea will not able to overcome slow growth unless it stops relying on tangible assets and products for growth. The country's economy in the post-coronavirus era should rely more on knowledge and technology that could invigorate individual's creativity and freedom.

The bank's dovish stance comes as the U.S. Federal Reserve decided Wednesday to maintain its benchmark interest rate at 0-0.25 percent range at least until the end of 2022 when the country is expected to get back on track to achieve employment and price-stability goals.