Tech exports have highs and lows in May

Tech exports have highs and lows in May 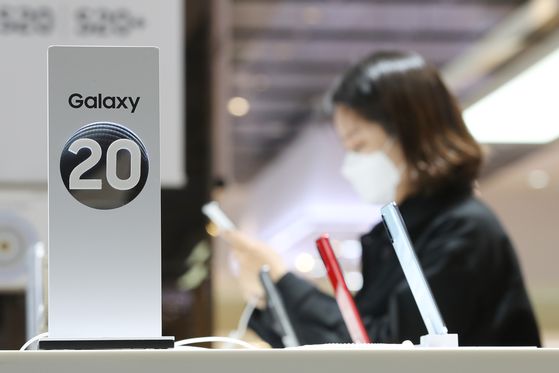 A customer checks out a smartphone at a Samsung store in Gangnam, southern Seoul, in late April. While semiconductor exports in May bounced back for the first time in three months, mobile phone exports including smartphones continued to fall due to the impact of the coronavirus pandemic. [YONHAP]


Korea’s tech exports struggled in May due to the coronavirus and its impact on global trade.


Semiconductor exports rose as a result of tech companies beefing up servers to accommodate more people working from home, but exports of other major items including mobile phones and displays saw sharp drops.

According to the Ministry of Trade, Industry and Energy on Sunday, Korea's ICT exports shrunk 2.6 percent year-on-year in May to $13.9 billion.

However, Korea was able to post an ICT trade surplus as imports fell at a sharper rate of 7.8 percent to reach $8.9 billion.

Korea's ICT trade surplus in May was $5 billion.

The ministry noted that while ICT exports continued to shrink, it was at a slower rate than in April, when ICT exports tumbled 15.3 percent.

Semiconductor exports rose 6.5 percent in May to $8.15 billion.

In March and April, semiconductor exports fell as the pandemic moved around the world.

In March, semiconductor exports fell 2.8 percent followed by a 15 percent fall in April.

Computers and related equipment such as hard drives saw a 73 percent surge in May to reach $1.2 billion.

SSD exports have been rising for eight consecutive months.

“May’s semiconductor exports improved from declines in March and April, largely due to demands from servers and personal computers as there has been an increase in ‘untact’ [non-human-to-human contact] activities,” said Kim Jung-min, an analyst at Hana Financial Investment. “SSD exports increased thanks to people working at home in many countries and taking classes online.”

Mobile phones, which include smartphones, saw exports drop 21.5 percent in May to $730 million.

But exports of mobile phones to Europe grew 11.7 percent compared to a year earlier to reach $70 million.

Exports to the United States, on the other hand, fell nearly 16 percent to $220 million, while exports to China fell 16.8 percent to $140 million.

Display exports continued to fall by more than 20 percent. In May, they fell 21.1 percent to reach $1.28 billion.

However, exports to Vietnam, which is the third-largest export market for Korean ICT goods, declined 10 percent to hit $1.71 billion. Semiconductor exports fell 6.4 percent, and mobile phones were down 13.5 percent.

While exports to Europe dropped 0.6 percent, exports to Japan fell 18.9 percent with semiconductor exports down 27 percent.