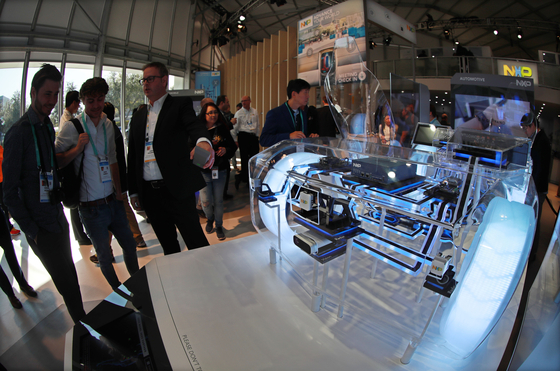 NXP's booth at the Consumer Electronics Show held in Las Vegas in 2020. [YONHAP]

Hyundai Motor and Kia are the latest in a group of automakers feeling the shortage of semiconductors, which has even led some to slash productions.

The Korean automakers which have been relatively confident in securing a stable supply of semiconductors for their vehicles are now on the verge of running out of surplus and are hurriedly scrambling to secure as much inventory as possible. Their efforts have caused some suppliers to turn to the black market, even if it means paying five to six times more than normal price.

“An executive from Hyundai Mobis’ purchase team is on a two-week quarantine in Korea after visiting Europe this month,” said an anonymous source in the industry.

“The executive visited the Netherlands and Germany where headquarters of auto semiconductors companies are located even amid the Covid-19 risk.”

Rumors circulated that employees from Hyundai Mobis, an auto parts affiliate of Hyundai Motor, have visited the headquarters of NXP and Infineon, the global No. 1 and No. 2 supplier of Micro Controller Unit (MCU) to plead for more contracts.

“Global automakers are on the search battle for semiconductors,” an official from Hyundai Motor Group said. “Visiting the headquarters won’t create any solution, but we have to do something to make this situation better.”

Hyundai Motor and Kia weren't so worried earlier this year in January when global automakers started to downsize their production at certain factories due to a shortage of semiconductors.

GM Korea, a local unit of the Detroit-based auto giant, has been operating its Bupyeong's No. 2 plant at 50 percent capacity since early February.

“Hyundai Motor will be okay until the end of this month, but the supply schedule of auto semiconductors has not been confirmed for next month,” said another unnamed source from the industry.


“For select items, they are checking the inventory on a weekly basis.”

A faster-than-expected supply shortage for Hyundai Motor and Kia largely derived from a fire at Renesas’ factory in February. Japan-based Renesas is the world’s No. 3 semiconductor supplier for auto and is one of the suppliers for Hyundai Motor along with NXP and Texas Instrument.

NXP's Texas factory was shut down for nearly a month since mid-February due to an unprecedented cold wave that hit the state which led to power outages.

Hyundai Motor and Kia's first-tier semiconductor suppliers include Hyundai Mobis, Continental and Denso, among others.

“Such black markets are located in Hong Kong and Singapore,” one source from a supplier said.

“They can secure some tens of thousands of units at a price that is five to 10 times more expensive.”

“The fire at Renesas is a short-term issue but the fundamental problem is that big suppliers like Taiwan’s TSMC has decreased its supply as well,” said Song Sun-jae, an analyst from Hana Financial Investment. “Lead time [which indicates the time it takes from an order placement to delivery] will be met on schedule in the third quarter and until then supply shortage will continue.”