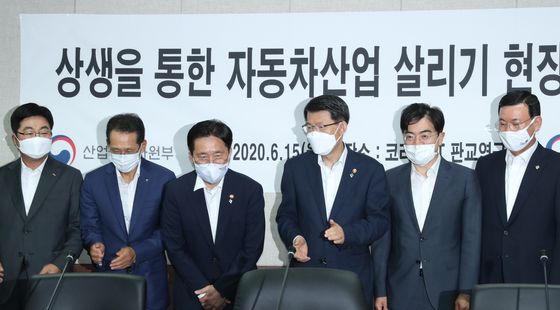 
The government on Monday announced a 300-billion-won ($248 million) loan guarantee program for small- and medium-sized companies in the automotive industry with low credit ratings.


The program will be partially funded by automaking giants. While the government will invest 10 billion won, Hyundai Motor will chip in a matching amount. GM Korea is currently negotiating its contribution.

Additionally, the government is planning 2 trillion won in liquidity support for major industries including automobiles that have suffered from the ongoing coronavirus crisis.

The announcements came on the heels of bad news for SsangYong Motor, as its majority shareholder threatened to give up on the Korean automaker.

“Roughly 5 trillion won in financial aid has been earmarked for the automotive industry since the coronavirus [crisis began in February],” Financial Services Commission (FSC) Chairman Eun Sung-soo said during a meeting with automotive industry heads and bankers on Monday.

“The automobile industry is struggling as global sales networks have been affected and operations of overseas plants suspended,” Eun said. “Small- and medium-sized enterprises [SMEs] are in intense difficulty as they struggle to access finance due to low credit ratings.”

At the meeting, Minister of Trade, Industry and Energy Sung Yun-mo stressed the importance of the automotive industry.

“The auto industry is responsible for the largest number of jobs in the manufacturing sector at 400,000 and is a major center of key industries that have strong links to other industries,” Sung said. “Additionally, cars are a test bed for the fourth industrial revolution and its innovative technologies including 5G, artificial intelligence and system semiconductors. If the foundation of the automobile industry collapses, we won’t be able to progress in the fourth industrial revolution era.”

According to the government, automobile production in Korea has not been as badly hit as in other countries.

Vehicle production in the first four months of the year declined 17 percent compared to the same period a year ago.

In the same period, auto production in the United States declined 33 percent. In Germany it fell 43 percent and in France 52 percent.

“This was largely thanks to the early quarantine steps that were taken and the government's cut in the individual consumption tax [on new car purchases],” Sung continued.

The trade minister said thanks to the government’s actions, loans extended to the automotive industry since the end of last year amount to roughly 1.5 trillion won.

“However, it is a fact that there’s a blind spot in regards to support for parts suppliers and medium-sized companies with low credit scores,” Sung said.

FSC Chairman Eun said suppliers of parts to troubled SsangYong Motor will be eligible for government financial support. He didn’t clarify if SsangYong Motor itself will.

Ssangyong Motor's very existence is in question as the automaker continues to lose money.

The FSC chairman said Monday it was difficult to give a definitive answer on whether SsangYong could take advantage of government financial aid targeting key industries.

Last week, Eun hinted that the troubles SsangYong Motor faces are not the same as those other automakers are facing and could be more fundamental.

In late May, the government announced a 40-trillion-won fund to offer liquidity for major industries. Support is being offered on the condition that companies keep 90 percent or more of their employees for a minimum of six months. In addition, they can't give dividends or buy back their own stock.

Unlike previous aid packages for SMEs, this support was targeted at conglomerates with over 300 employees.

SsangYong Motor’s largest shareholder, Mahindra & Mahindra, raised the possibility of giving up on the Korean automaker. The Indian business group has a 75 percent stake.

“We thought we would be able to break even in two years, which did not happen,” said the Indian company’s CEO Pawan Goenka in a conference call with analysts last Friday. “We are looking at potential investors and we are willing to give up ownership control in the company.”

SsangYong Motor reported its 13th consecutive quarterly operating loss in the first quarter of this year. In the first three months, it posted a 98.6-billion-won operating loss as car sales dropped by 30 percent. Its net loss surged 641.3 percent to 193.5 billion won compared to the same period a year ago.

In May, the company’s auditor KPMG Samjong released a report questioning its viability. “The company’s liquid liabilities exceed liquid assets by 576.6 billion won,” the report stated. “Under such a situation, it is questionable whether this company could exist in the future.”

Since the beginning of this year, Mahindra & Mahindra has been asking for government support to turn the automaker around.

SsangYong Motor has to repay loans of 90 billion won to the Korea Development Bank (KDB) in July.

SsangYong Motor lost a foreign investor in the past.

After five years of owning SsangYong Motor, Shanghai Automotive filed for a court-managed restructuring in 2009. The move led to layoffs that sparked a violent protest.

Mahindra & Mahindra bought 72.85 percent of SsangYong Motor for 522.5 billion won in 2011 from the automaker’s creditors, including the KDB.

GM Korea union to continue to strike over wages