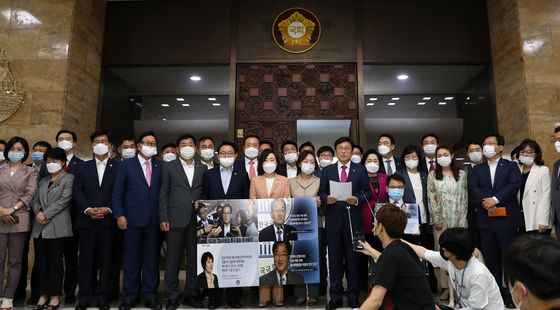 First-term lawmakers of the main opposition United Future Party hold a press conference at the National Assembly on Monday to denounce the ruling Democratic Party’s plan to elect standing committee chairs without a compromise. [NEWS1]


Using its overwhelming majority in the National Assembly, the ruling party on Monday elected six of its lawmakers to chair key standing committees during a plenary session boycotted by the main opposition party.

Rep. Yun Ho-jung of the ruling Democratic Party (DP) was elected chairman of the powerful Legislation and Judiciary Committee, ending a years-long tradition that a senior lawmaker of the largest opposition party occupies the post.

While allies of the DP, including the Openminjoo Party and some independent lawmakers, attended the session, the main opposition United Future Party (UFP) boycotted the vote to protest the DP’s strategy of using its majority to operate the legislature. In the new National Assembly, whose 300 members were elected in April, the DP has 176 lawmakers, enough to pass almost any bills except for constitutional amendments. The UFP has 103.

Over the past weeks, the DP and the UFP wrangled to decide who should chair the Legislation and Judiciary Committee, the final gatekeeper of all bills before they head to a voting session. The DP, which initially demanded to chair all 18 committees, later presented a compromise to the UFP that it will chair 11 including the Legislation and Judiciary Committee.

The UFP has made clear that it won’t accept the proposal, because it needs the Legislation and Judiciary Committee to block the ruling party from railroading bills through the legislature.

After Speaker Park Byeong-seug opened a session Monday evening to elect six committee chairs as proposed by the DP, Rep. Joo Ho-young, floor leader of the UFP, gave an emotional speech before the lawmakers. “Today will be remembered historically [as the day] the National Assembly disappeared,” Joo said. “It will be remembered as a day when the dictatorship of the ruling party began.”

Joo then said the DP should just go ahead and take all 18 committees.

“This is the first step for the Moon Jae-in administration to ruin the country’s politics for its remaining term of the next two years,” he said.

To protest the DP's action, Joo resigned from his floor leader post.

Speaker Park forcibly assigned some UFP lawmakers to the six committees without their consent.

It's the first time since May 1987 that the ruling party started the process of forming the committees without participation from the main opposition party. There was no precedent since the country’s democratization in June 1987.

Earlier in the day, Speaker Park hosted a final round of negotiations between the floor leaders of the DP and the UFP in his office. As both Rep. Kim Tae-nyeon of the DP and Rep. Joo of the UFP insisted that the Legislation and Judiciary Committee must be chaired by one of their own, the negotiation ended without a compromise.

Speaker Park subsequently announced that the National Assembly would hold a session at 6 p.m. to elect the standing committee chairs. The DP said it will attend the session and elect the committee heads, while the UFP said it will boycott it.

Joo held a press conference after the failed talks and stressed that the UFP made a reasonable demand, but the DP had no intention of listening.

“We just wanted to respect the tradition that the DP chair 11 and we chair seven, while the Legislation and Judiciary Committee be chaired by a lawmaker of the largest opposition party, since the National Assembly speaker is from the ruling party,” Joo said.

On June 5, the National Assembly elected DP’s Park as the new speaker, but the UFP walked out of the meeting to protest the ruling party’s demand to chair all 18 standing committees. Following his election, Park surrendered his DP membership as a sign of his neutrality.

“How is our demand unreasonable when all we are asking is to have a minimal mechanism to keep the National Assembly in check?” Joo asked. “The DP demands to chair all 18 committees, while the UFP is asking for a minimal system to keep the legislature in check. Who’s the greedy one here?”

Joo also said Speaker Park should feel embarrassed to assist the ruling party’s highhandedness while showing no respect to other parties.

“I want to warn the Blue House and the DP,” Joo said. “It may feel easy to push around the opposition with your majority, but you won’t be able to avoid the winner’s curse.”