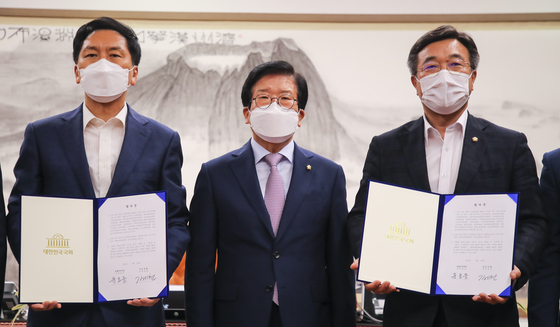 
The leadership of the ruling party is facing backlash from hardline politicians and supporters for striking a deal with the main opposition party to allow it to chair the powerful Legislation and Judiciary Committee next year.

Rep. Yun Ho-jung, floor leader of the ruling Democratic Party, and his People Power Party (PPP) counterpart Rep. Kim Gi-hyeon reached a deal on Friday that they will revive the years-long tradition that a senior lawmaker of the largest opposition party will chair the Legislation and Judiciary Committee, the final gatekeeper of all bills before they head to a voting session, during the second half of the 21st National Assembly.

They also agreed that the PPP will chair six other committees, while the DP will chair the remaining 11.

The redistribution of the committee chair posts will end the DP’s unprecedented control over all 18 committees. After its overwhelming victory in the 2020 legislative election, the DP made an unprecedented demand that it will chair all committees, and the PPP had failed to make a compromise.

Yun and Kim agreed that a voting session will take place on Aug. 25 to elect seven PPP lawmakers as new committee chairs. The National Assembly will also hold a vote to elect a senior PPP lawmaker as a deputy speaker.

After Yun struck the deal with Kim, some hardline supporters of the DP fiercely condemned Yun and Chairman Song Young-gil, complaining in particular that the DP will no longer be able to wield its majority to pass any bill it wants because Yun gave the Legislation and Judiciary Committee chair post to the opposition.

A political YouTube channel operator, Lee Jong-won, argued Friday night that allowing the PPP to chair the Legislation and Judiciary Committee is like giving up the presidential election. He urged DP supporters to denounce the party leadership over the deal.

Lee also made public the mobile phone numbers of Rep. Yoon and Chairman Song of the DP, urging his viewers to send text messages in protest.

Shortly after his broadcast, the bulletin board of the DP’s homepage was flooded with postings demanding resignations of Song and Yun.

The two DP leaders said their mobile phones have been bombarded with text messages for days. "I can't use my phone," Song told the JoongAng Ilbo on Monday.

Despite the leadership trying to calm the public down, some of the DP’s presidential candidates added fuel. Gyeonggi Gov. Lee Jae-myung and former Justice Minister Choo Mi-ae said the deal must be reconsidered.

In contrast, former DP Chairman Lee Nak-yon said the promise must be kept, even if it was not satisfactory.

As complaints grew, Yun sent letters to DP lawmakers on Monday to explain why he made the concession.

“The opposition and the media have said we are operating the legislature as if we are a dictator,” Yun wrote in the letters. “If we continue controlling all committees, we will face further criticism, and that will be poisonous for our party’s presidential candidate.”

He also said the National Assembly Act will be revised in August, before handing over the chairmanship of the Legislation and Judiciary Committee to the PPP. According to the revision, the committee’s power will be limited to editing the structure and wording of a bill.