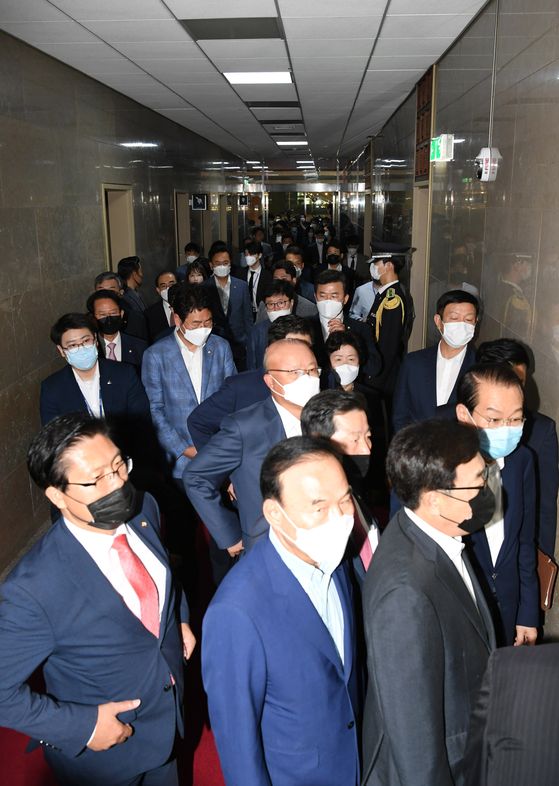 
Lawmakers of the main opposition United Future Party (UFP) on Tuesday resigned en masse from standing committees to which they had been forcibly assigned by the National Assembly speaker.

Led by Rep. Kim Sung-won, deputy floor leader of the UFP, 45 lawmakers of the largest opposition party visited National Assembly Speaker Park Byeong-seug to protest his decision to assign them to six standing committees against their will.

“The party cannot accept Park’s forcible assignments of our lawmakers to committees,” Kim said. “We are resigning from those committees en masse because the assignments were made without legal grounds.”

Kim also said the UFP made a strong complaint to Park and the ruling Democratic Party (DP) for their unprecedented violence against the legislature.

“To normalize the National Assembly operation, Park must void the elections of the heads of the six committees,” he said. “We won’t attend the standing committee meetings today.”

After a series of failed negotiations between the DP and the UFP over who will chair the powerful Legislation and Judiciary Committee, Speaker Park on Monday opened a main session and allowed the elections of six standing committee chairs. The UFP, which had boycotted the election of Park as the speaker earlier this month, also refused to participate in the voting of committee chairs.

Six DP lawmakers were elected to head those committees, including the Legislation and Judiciary Committee, the final gatekeeper of all bills before they are voted on.

Before the elections, Park assigned the 45 UFP lawmakers to the committees, despite not receiving applications from them. To protest the way Park and the DP operated the legislature, Rep. Joo Ho-young, floor leader of the UFP, resigned from his chief negotiator post on Monday.

Before his resignation, Joo gave an emotional speech at the National Assembly, condemning the speaker and the DP for abusing the power of the majority to start a "dictatorship." The DP controls 176 seats in the 300-member legislature, enough to pass any bills except for constitutional amendments, while the UFP has 103 lawmakers.

It was the first time since the country’s democratization in June 1987 that the ruling party started the process of forming committees without participation from the main opposition party.

Later in the evening on Monday, UFP lawmakers approved a vote of confidence to keep Joo as their floor leader.

Kim Chong-in, the UFP acting head, said Tuesday he persuaded Joo to return to his job.

“I will take a few days off,” Joo was quoted as saying by Kim.

The DP said Tuesday that it will complete the formation of the other 12 standing committees by the end of this week. “The National Assembly will start working today, but operating six committees is not enough to properly counter the crisis from the Covid-19 outbreak,” Rep. Kim Tae-nyeon, floor leader of the DP, said.

“We won’t go back to the past, where we waste time for psychological warfare and foul play called 'political technique,'” he said. “By electing the Legislation and Judiciary Committee chair yesterday, we forever ended the method that often paralyzed the National Assembly. The UFP must face the new normal and adapt to changes.”

On Tuesday, the DP started operating the six committees, chaired by its lawmakers. In addition to the Legislation and Judiciary Committee, the Strategy and Finance Committee, Foreign Affairs and Unification Committee, National Defense Committee, Health and Welfare Committee and the Trade, Industry, Energy, SMEs and Startups Committee scheduled meetings. 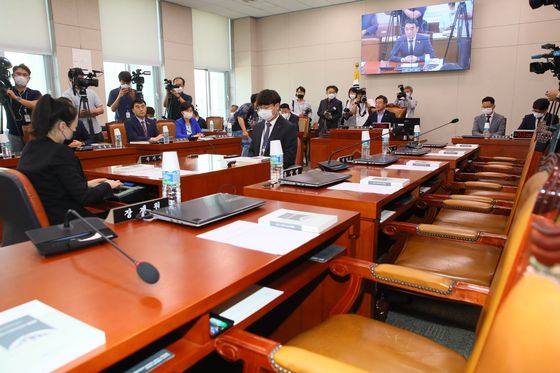 The Legislation and Judiciary Committee holds its first meeting of the new session on Tuesday, after Rep. Yun Ho-jung of the Democratic Party, was elected as its chair. The main opposition United Future Party boycotted the meeting. [YONHAP]

The UFP lawmakers assigned to those committees boycotted the meetings.