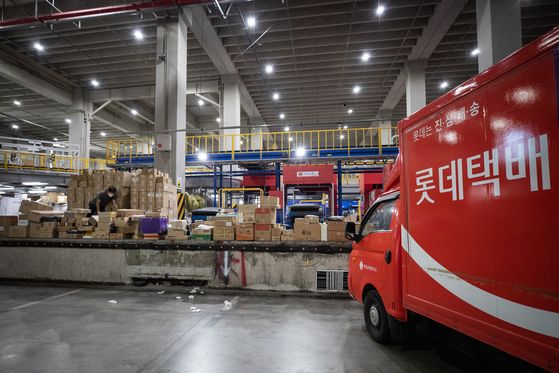 A Lotte distribution center in Songpa District, southern Seoul, is shut down for disinfection Monday after a worker there came down with the coronavirus. At least 159 of his colleagues have been ordered to get tested and self-isolate at home. [NEWS1]


Korean health authorities Monday warned of untraceable coronavirus infections in the Seoul metropolitan area, saying the inability to track the sources of new cases was complicating attempts to prevent secondary and tertiary infections.

Among 618 people in Korea who were diagnosed with Covid-19 over the past two weeks, officials said they still don’t know how 63 people — 10.2 percent of the total group — got infected, marking the first time that the figure surpassed the 10-percent mark.

Authorities have often cited the 5-percent mark as one of its core goals in controlling the outbreak, saying any figure higher than that could lead to many more chains of infections. Korea managed to keep the ratio below 5 percent for a period in late April, when its daily new cases of the coronavirus sunk to the single digits.

Thirty-seven new cases were recorded Sunday, three more than the day before, according to the Korea Centers for Disease Control and Prevention (KCDC) on Monday morning.

“About 90 percent of all new patients [in the country] and 80 percent of untraceable cases are coming from the Seoul metropolitan area,” KCDC Director Jung Eun-kyeong said Monday in a press briefing.

Jung continued that nearly half of all coronavirus infections in Korea were asymptomatic, further undermining health officials' attempts to track patients who are far less likely to show up for testing.

“Because we don’t know who’s infected or not, it’s important for [everyone] to follow [the government’s] hygiene rules in their everyday lives and practice social distancing,” Jung stressed. 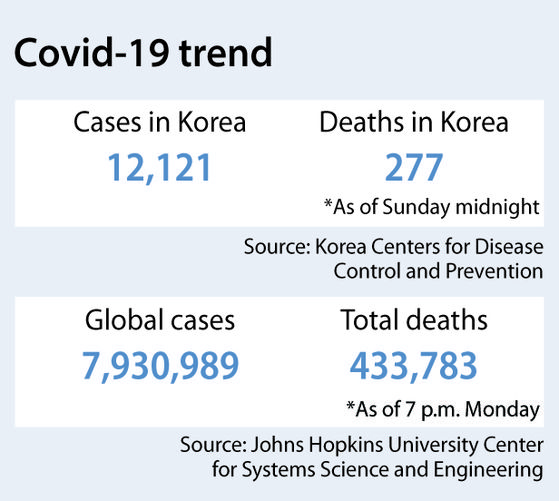 Of the 13 imported cases, four were from Pakistan, three from the Americas and two each from Iraq, Qatar and Europe, KCDC data showed.

By Sunday at midnight, 277 people had died, the same as the previous day, while 10,730 people had been declared fully recovered, up by 12 from the day before.

Officials in Songpa District, southern Seoul, and Siheung, Gyeonggi, said Monday that a Chinese man who lives in Siheung and worked at a distribution center of retail giant Lotte Group in Songpa for at least three days last week had been diagnosed with Covid-19 last Saturday morning.

No other employee at the distribution center has tested positive for the virus yet, but the company said his colleagues are being tested and told to self-quarantine at their homes.

The case comes during an alarming time for Seoul, as an earlier cluster that erupted at the distribution center of Korean e-commerce company Coupang in Bucheon, Gyeonggi, late last month hasn’t been entirely stemmed yet, with new cases being added periodically. At least 147 patients have been traced to the Coupang cluster to date, 83 of whom worked there. The rest had contact with those workers.

At the Lotte distribution center in Jangji-dong, the Chinese man was said to have worked from June 8 to 10 and ate at a nearby Seven Eleven convenience store at least twice during the period.

Officials said he first felt a cough on June 8, and visited a Covid-19 testing center in Siheung last Friday. His test results came out positive on Saturday. He testified to have worn a face mask during his work hours.

It appears he got infected by a relative who lives in Siheung and was diagnosed with Covid-19 last Thursday, but it's unclear how that relative got infected.