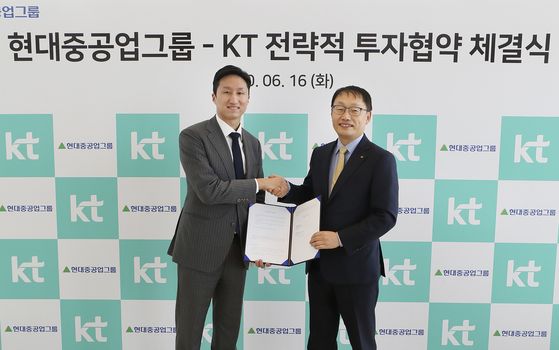 
Mobile carrier KT signed a 50-billion-won ($41 million) deal Tuesday to acquire a 10 percent stake in Hyundai Robotics after its planned initial public offering (IPO) in 2022, in a bid to strengthen its development of consumer-oriented robots.

Having spun off from parent company Hyundai Heavy Industries Group in May, Hyundai Robotics is planning to go public in 2022. The pre-IPO deal promises the mobile carrier a 10 percent stake in Hyundai Robotics once it is listed on the stock market. KT forecast the robotics company’s value in 2022 at 500 billion won.

This is KT’s first major acquisition under CEO Koo Hyun-mo, appointed earlier this year. The deal comes after a year-long partnership between KT and Hyundai Heavy Industries Group — Hyundai Robotics’ parent company — to cooperate in 5G-based robots and smart factories, for which the two had signed an agreement in May 2019.

While last year’s agreement promised co-development of industrial robots for business-to-business use, the Tuesday deal extends that to a long-term partnership on consumer-oriented robots, a KT spokesman said.

The two will work together in developing “intelligent” service robots which can understand its surroundings and perform actions like surgery, rehabilitation sessions, cleaning and education. This is a relatively new field for the robotics company as well, as it has mainly focused on industrial robots used in factories or logistics.

KT will develop self-driving technology and software while Hyundai Robotics will take charge of hardware and manufacturing. In April, the two launched the “N bot” to work at the Novotel Ambassador Hotel Dongdaemun in central Seoul. They now aim to explore new areas like serving robots, patrol robots and cleaning robots.

Apart from continuing the existing collaboration in smart factory technology, the two will also work together to find opportunities in smart hospitals and smart logistics, they said.

To oversee the partnership, Hyundai and KT will establish a joint committee made up of top executives from both companies, including KT CEO Koo and Hyundai Heavy Industries Senior Vice President Chung Ki-sun.