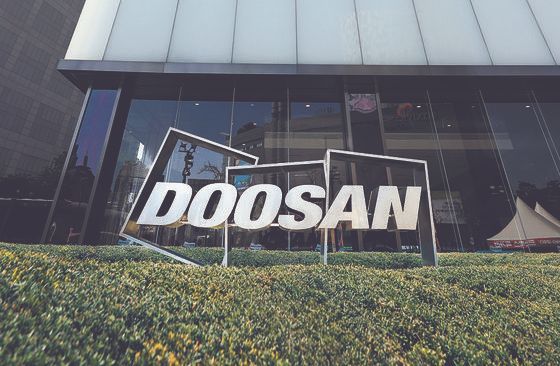 Doosan Tower in central Seoul on Tuesday. Doosan Engineering and Construction is spinning off assets to sell. [YONHAP]


Doosan Engineering and Construction is spinning off its construction unit as it tries to find a buyer.


Doosan Engineering and Construction (E&C) Monday reported it is spinning off certain construction-related assets and liabilities into a newly established Valuegrowth Corporation. They include uncollected receivables like a failed apartment development in Incheon and a resort in Pocheon, Gyeonggi.

Selling Doosan E&C has been a priority for money-bleeding Doosan Group. It was delisted in March after all its shares were purchased by Doosan Heavy.

Doosan Cuvex is a Doosan affiliate that owns and manages golf courses and a resort in Chuncheon, Gangwon. It is 36.3 percent owned by Doosan Heavy Industries & Construction, 29.2 percent by Doosan Corporation and 24.66 percent by Doosan Infracore.

Nice Investors Service on Monday lowered Doosan E&C’s credit from B to B minus, citing financial instability.

“The financial stability of the company is low — its debt ratio as of March exceeded 400 percent, while its total borrowings to total assets were 30 percent,” wrote Nice in a report released Monday.

As Doosan Heavy continues to struggle, rumors that it is selling its 36.27 percent stake in Doosan Infracore are also circulating. “Nothing has been confirmed,” said Kim Ji-hyang, a spokesperson for Doosan Group.

KB Securities says the chance of Doosan Infracore selling its shares in Doosan Bobcat is unlikely.


“The sales value [of Doosan Infracore] drops if Bobcat, which accounted for 62.9 percent of the total operating profit of construction equipment affiliates, is spun off,” wrote Jeong Dong-ik, an analyst at KB Securities. “Also, the debt [of Infracore] as of the first quarter was 2.9 trillion won, which is 12 times the 244.2 billion won it is projected to earn in operating profit this year.”