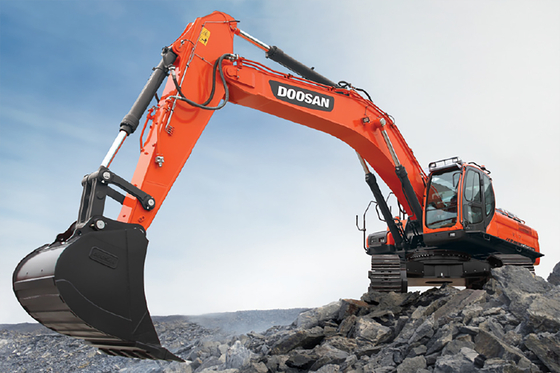 Doosan Infracore’s excavator, which is being supplied to a construction company in Saudi Arabia. [DOOSAN INFRACORE]

Ever since the Covid-19 outbreak earlier this year, Doosan Group has been busy trying to sell off assets to improve its financial structure.

Doosan group could not confirm the date the final bidder would be selected, but market watchers project Hyundai Heavy to be one of the strongest candidates due to the synergy effect it could generate with its subsidiary Hyundai Construction Equipment.


In early August, Hyundai Heavy Industries Holdings denied reports that it is considering a takeover of Doosan Infracore. But its stance changed after Doosan Group said that it will repay any additional debts of Doosan Infracore’s Chinese unit.

Currently, Doosan Infracore is in a legal battle with its financial investors.

The investors are currently waiting for a Supreme Court decision. In the appeals trial, the court took the side of the financial investors. If the ruling isn’t overturned, Doosan Infracore could face up to 700 billion won ($598.44 million) worth of debt, which is the total amount of investment the investors injected plus the interest that has piled up over the years since the issue was taken to court.

But now that Doosan Group has promised to be responsible for the consequences of the legal battle, the value of Doosan Infracore has risen. The initial date for preliminary bidding was Sept. 22, but Credit Suisse, which arranged the deal, pushed the date to Sept. 28 after Doosan Group made the announcement due to a possible change in value.

The price of Doosan Heavy’s shares in Doosan Infracore is now estimated at between 800 billion won and a trillion won.


Hyundai Heavy Industry Holdings took part in the bidding in a consortium with KDB Investment, a subsidiary of the state-run Korea Development Bank.

The consortium is seen as a major candidate in the bidding due to the synergy effect that can be generated between Doosan Infracore and Hyundai Heavy Industry Holdings’ subsidiary Hyundai Construction Equipment.

“Hyundai Construction Equipment will be able to generate a synergy effect through the acquisition because it can secure Doosan Infracore’s supply and distribution networks and share technologies,” said analyst Lee Dong-heon from Daishin Securities. “Securing the networks and technologies has become particularly important due to the intensified competition from competitors in the Chinese market.”

China is one of Doosan Infracore’s largest markets.

But the exclusion of Doosan Bobcat, another construction equipment maker under Doosan Group, from the acquisition deal could be seen as a factor that reduces the value of the deal.

Doosan Bobcat, which is 51.05 percent owned by Doosan Infracore, reported $52.44 million in operating profit in the first half of this year on $788.47 million in sales.

In the second quarter, Doosan Bobcat accounted for 48 percent of Doosan Infracore’s total sales, which stood at 1.98 trillion won.

Following the sales of Doosan Infracore shares, Doosan Group is likely able to raise 3 trillion won. Since the Covid-19 outbreak, its creditors — Korea Development Bank and the Export-Import Bank of Korea — have injected 3.6 trillion won into Doosan Heavy.