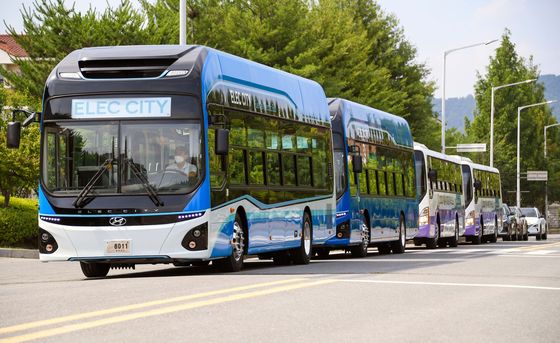 Korea’s military will get slightly greener as it adopts more hydrogen-powered vehicles under a new deal with Hyundai Motor.

Hyundai Motor said Tuesday it has signed a memorandum of understanding (MOU) with the Ministries of National Defense, Trade, Industry and Energy and Environment as well as Doosan Mobility Innovation (DMI) to promote the distribution of hydrogen-powered vehicles, drones and charging stations in the military.

The newly distributed vehicles are expected to be used for transportation at Jaundae, an army training site located in Daejeon, according to the carmaker. Charging stations will be also set up for both private and military usage near the base.

Under the MOU, the Ministry of National Defense will operate eco-friendly vehicles until next year and consider further implementing them in the future. It will also consider adapting fuel-cell powered drones for military usage.

The Ministry of Trade, Industry and Energy will support the development and operation of technology related to fuel-cell batteries. The Ministry of Environment will contribute in setting up more charging stations for the eco-friendly vehicles.

“The latest MOU is a contribution to the hydrogen economy which the Korean government is pushing as the country’s core business,” the carmaker said in a press release.

“It is especially meaningful as the MOU extended the distribution of hydrogen-powered vehicles to the realm of the military.”

At the MOU signing ceremony on Tuesday at Jaundae, DMI demonstrated its hydrogen-powered drone DS30, which can fly up to two hours on a single charge.

Hyundai Motor’s Nexo SUV, which can drive about 600 kilometers (370 miles) per charge, has been used for official purposes in various government departments including the Ministry of National Defense.